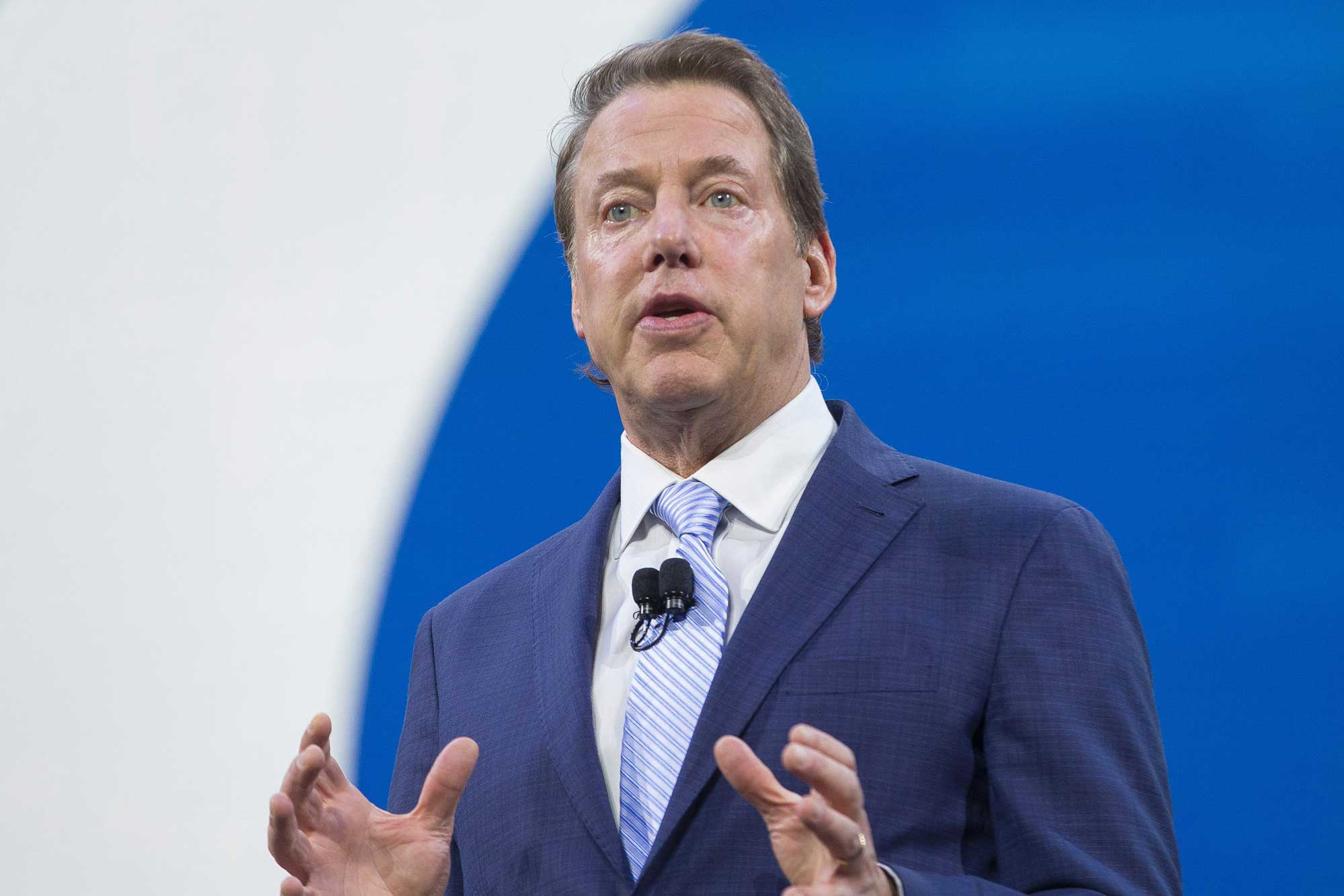 Ford Chairman Bill Ford speaks May 19, 2021 during the unveiling of the electric F-150 Lightning pickup truck outside the automaker’s world headquarters in Dearborn, Mich.
Ford

DETROIT – A decade ago, Ford Motor was positioning itself to be a leader in electrified vehicles with new global models such as the C-Max and Focus Electric.

Those “green” cars were to lead the automaker’s efforts to potentially electrify 25% of its fleet by 2020, Ford Chairman Bill Ford wrote in a May 2011 article for Fortune Magazine. They didn’t and Ford watched as a start-up, Tesla, emerged as the industry’s benchmark for zero-emissions vehicles, and crosstown rival General Motors became Wall Street’s top legacy automaker for EVs.

Ford’s newest CEO Jim Farley, who took the helm Oct. 1, quickly announced a harder pivot to EVs as the automaker released an all-electric Mustang crossover and an upcoming F-150. While the new electric vehicles have been well received, Ford has to fight for a leadership position amid a litany of old and new competitors.

It’s something Bill Ford, great grandson of the company’s founder, is well aware of. A greener automotive industry has always been a mission of his. As an environmentalist and the longest running chairperson of any automaker, he has acted as a rare champion, or conscience, of green practices in the industry.

It’s something that was historically taboo, even discouraged, in a business reliant on fossil fuels to power its products and large trucks to drive its profits.

But that’s changing. The promise of electric vehicles and Wall Street’s support of more sustainable companies has Ford believing his decades-long vision of a greener automotive industry and company are finally achievable. And investors have taken notice, sending shares of Ford up by about 50% in 2021.

“When I joined the company in 1979, I joined as somebody who cared deeply about the environment, and I was absolutely appalled that that view was not only not shared, but it was frankly scorned within the company,” he told CNBC during a video interview. “That’s all changed now. And, yes, it makes me really excited.”

Bill Ford admits that the company’s early “green cars” may have not been as successful as he wanted at that time. But he believes the industry and consumer acceptance of electric vehicles is changing and that his push for a more sustainable industry was right all along.

Doing the “right thing” hasn’t always been easy for the 64-year-old automotive heir. His support for both the environment and the industry have always been at odds with one another and drawn criticism from supporters of both sides.

Ford was the only American automaker to do so at the time. Ford’s largest crosstown rival – General Motors – backed the Trump administration before changing its stance to support California following Joe Biden, a supporter of EVs and stricter vehicle emissions regulations, defeating Trump.

President Donald Trump wears a mask during a private viewing of three Ford GTs from over the years at the Ford Rawsonville plant.
NBC News

“It’s important to stand for things. We’ve taken stances on the environment that haven’t always been popular, and in many cases have gone against what the rest of our industry has done,” Ford, whose career now spans seven American presidents, said. “And that’s OK because it gives you a sense of who you are.”

Farley, who joined Ford in 2007, earlier this year described that sense as being “absolutely” imperative to the automaker and its future plans. The company is soon expected to release more on its sustainability plans and how they relate to its new Ford+ turnaround plan.

Fred Krupp, president of the Environmental Defense Fund, said the company’s support of California’s emissions standards and the Paris Climate Agreement were two of the most recent examples of Bill Ford’s leadership in the industry.

“He’s been a leader,” Krupp, who has known Ford for 20 years, said during a phone interview. “I can’t think of another American auto executive that has done more to move the issue forward than Bill.”

Despite the chairman’s support for EVs and the environment, the automaker hasn’t said when it expects to convert its entire lineup to EVs, unlike rival GM which has said it plans to go all electric by 2035. Ford has said it expects 40% of its sales volume globally to be all-electric vehicle by 2030.

Bill Ford said it’s ultimately up to consumers to decide just how quickly EV adoption will occur, but more investment and new products will help. Ford’s current lineup includes plug-in hybrid electric vehicles with gasoline engines as well as the Mustang Mach-E crossover – its only EV.

“Our customers will really dictate how quickly it happens,” Ford said. “But I will tell you that we’ll be ready when that happens. We’re pushing incredibly hard. You’ll see more announcements from us in the near future.”

Ford has at least two additional EVs coming by mid-next year – a commercial van later this year and an electric version of the F-150 pickup called Lightning. The new EVs are part of Ford’s plans to invest more than $30 billion in electric vehicles through 2025, about $7 billion of which had already been invested before February.

Ford said he’s “very confident” that the automaker can be a leader in electric vehicles. He also believes there will be some consolidation in the automotive industry, as a barrage of new competitors attempt to entire the space.

“We are clearly an industry in the middle of change and I believe that if we were too fast forward 10 years from now, there will be clear winners and losers in this new world of EVs, [autonomous vehicles] and software,” he said. “I think that the winners may not be all the familiar faces that people would have thought of.

“I mean clearly look at a company like Tesla, which is a very young company, and they’ve done incredibly well. There will be others like that.”

Aside from its own investments in EVs, Ford is a minority investor in EV truck start-up Rivian, which filed for an initial public offering last week. The company is reportedly seeking a valuation of $80 billion – giving the young company a higher valuation than Ford at $51 billion and GM at $71 billion.

EVs aren’t the only part of Bill Ford’s vision for a greener future. He believes autonomous vehicles and reworking the industry’s manufacturing and supply chain need to happen as well.

He said more needs to be done regarding reducing the industry’s entire carbon footprint, including using more renewable energy to produce vehicles, as well as autonomous vehicles that can ease public transportation problems and global gridlock.

While the shift to EVs is in its early days, Ford, 64, isn’t after a more than 40-year career with the automaker. However, he has no plans of stepping down from the company for the foreseeable future, even as a younger generation of Ford’s join the board. His daughter, Alexandra Ford English, and nephew, Henry Ford III, were both elected to the company’s board in May.

“I feel like I’m adding value to Ford today, maybe more than I ever have,” Ford said. “As long as I feel like I’m contributing and can work at the pace that the company needs me to work at, I’ll be here. Someday that won’t be the case and I think I’ll know when that happens.”

Ford Motor Company today announced that Alexandra Ford English and Henry Ford III have been nominated to stand for election to the company’s board of directors at its annual meeting of shareholders on May 13.
Source: Ford Motor Co.
This article was originally published by Cnbc.com. Read the original article here.

Elon Musk says the Fed must cut rates ‘immediately’ to stop a severe recession
China ‘played a great game’ on lithium and we’ve been slow to react, industry CEO says
Los Angeles bans new oil wells, will shut old ones down by 2042
Lifting of lockdowns in major Chinese cities signals shift in COVID stance
Prosecutor explains what happens if Trump is indicted