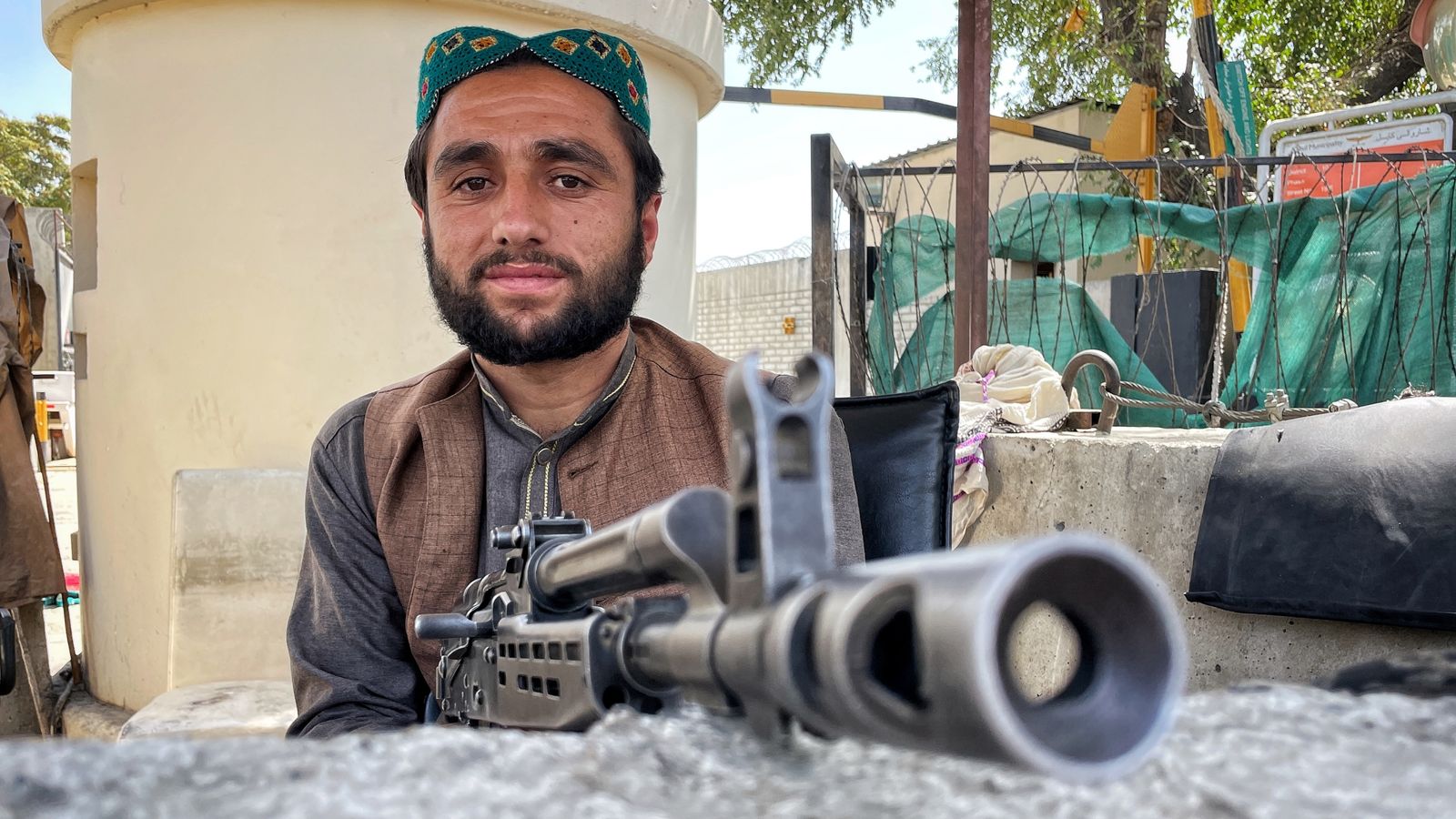 The British embassy’s new tenants in Kabul cannot understand why the diplomatic staff have not returned since the Taliban took control.

“Why don’t they come back?” one of the Taliban commanders escorting us asks.

He knows we are British and pushes us further. I wonder briefly whether he’s taunting us. After a 20-year war in which the Taliban see themselves as routing some of the toughest and richest armies in the world, the fighters we see at multiple checkpoints in the city have a relaxed air of confidence about them.

“They say they believe in human rights,” the commander goes on, referring to the embassy staff, “so why aren’t they here? It is safe in Kabul now. Why don’t they return?”

I do not think he is really expecting an answer. He certainly doesn’t wait for one from me.

Another commander invites the British diplomats to return “today, tomorrow, whenever”, adding: “We will be happy to have them here.”

But after two decades of fighting those they viewed as among the “invaders” of their country, their invitation is likely to be viewed with much caution back in Westminster.

As we walk around the embassy complex with the Taliban guards, it strikes us as eerily quiet. There are a few personal possessions which have spilled or been pulled out of a suitcase and are laying on the pavement outside the offices.

Among the clothes, there are greeting cards still in their plastic wrappers inside the case. A British army flag is spread out nearby and there’s a blue flak jacket which has been draped over the gate which once protected the embassy staff working behind it.

A storeroom appears to have been ransacked and food supplies including scores of tin cans are scattered outside.

“We have not touched anything,” the Taliban fighters tell us. “We are not allowed to. Everything is intact.”

They go on to say that other “mujahideen” came in before them. “They were thieves,” one says.

A large clock lying on the ground is still ticking. It reminds us of the infamous words said to have been uttered by one Taliban commander 20 years ago who apparently remarked: “You have the watches, but we have the time.”

In the end, just sitting it out and waiting worked. The empty British embassy seems a metaphor for the failed mission.

The front of the US embassy has been painted over with Taliban slogans. A couple of children are outside selling white Talib flags. How quickly the situation has changed in the country.

As we are being taken round the Canadian embassy, Abdul Malik, the Taliban commander in charge of security there, invites us to film the rubbish bags filled with empty bottles of alcohol. “This is against sharia law,” he tells us.

“They must have had a lot of money to drink this much…they used to eat good food, get drunk, and then have sex with each other.”

It is bizarre wandering round this compound, once so heavily guarded against terror attacks, now deserted apart from its Taliban guards. In the Canadian embassy grounds, a tortoise ambles its way across the forecourt to the amusement of the Talibs who prod and stare at it.

“Why did they bring this here?” one asks us. The answer escapes us all but like everything else in the compound, it’s now under new ownership: a Taliban tortoise.

The commander lambasts the international community for having left the country. “Where is your help and support?” he asks us.

“Instead you’re always shouting we’re terrorists…come and see the Taliban government and compare us to the previous one…analyse their security and look at ours.”

Like several of the commanders we spoke to, he wants “normal” relations with the rest of the world. About 80% of Afghanistan’s money comes from foreign donations or aid. The country simply cannot afford to be ostracised.

In a direct appeal to diplomats, politicians and business people, he said: “Come and start your work again. No one will hurt you…it’s diplomatic relations and it’s the right of every country. You must do it and we must do it.”

But plenty in his own country are not reassured. Two young journalists working for the Etilaatroz newspaper say they were badly beaten and tortured by the Taliban for covering a women’s protest demanding more freedoms.

The journalists were taken to a police station in the city and say they were held in separate rooms and then whipped with cables. The pain was so intense both say they passed out. There are huge weals and extensive bruising on their backs, shoulders, thighs and buttocks.

Taqi Daryabi, 22, said: “What they did is not what a human should do to another human…but what the Taliban did, it’s in the past and gone and I’m not afraid or scared.”

Both he and his fellow journalist, Neamatullah Naqdi, insist they will carry on reporting.

“No, this won’t stop me, because it’s my profession and I will continue. I won’t stop. I’m informing people what’s happening and no one will stop us doing this.”

But their editor-in-chief warns this is just the beginning and appealed for both Afghan journalists and those outside to stick together.

“It will happen again and it will get worse,” Zaki Daryabi said.

“These journalists were tortured. No other explanation. They were beaten and tortured for doing their job.

“We need the international community to stand with us and insist the Taliban are held to account because this will have a terrible impact on media freedom and everyone’s freedoms in this country.”

Toyota issues recall for its flagship electric SUV following concerns about wheels coming off
Can the Avs clinch on home ice? Previewing what could be a deciding Game 5
Britain and allies face ‘1937 moment’: Head of army to warn of Putin’s expansionist ambitions
UiPath to cut 5% of its workforce as part of restructuring plan
Adam Boulton on lessons to be learned from strikes past, present and what they mean for the future