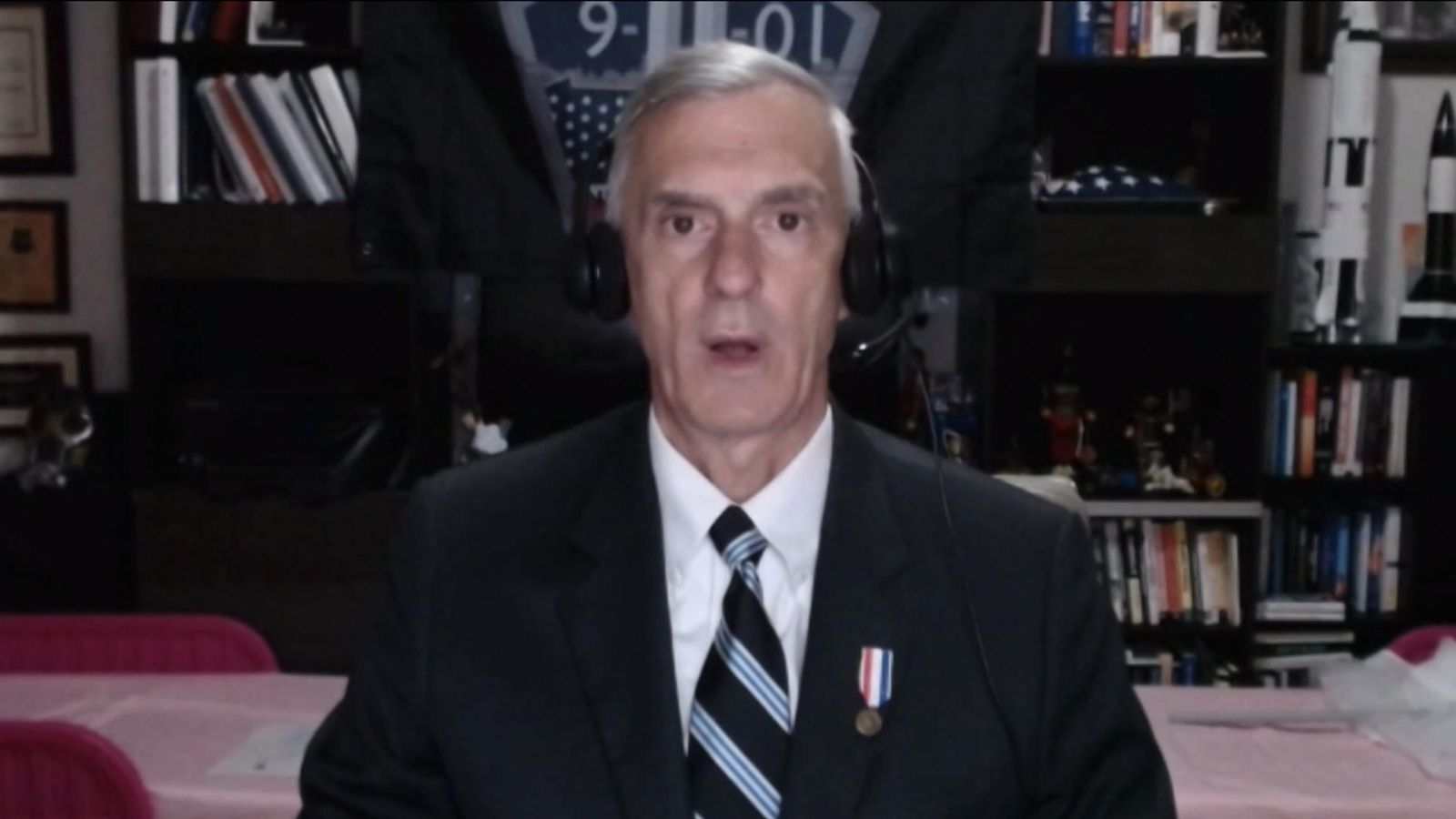 “I’d spent a long weekend with my young son,” he recalled, including his son’s first visit to the World Trade Center, and had celebrated his birthday with his wife in Manhattan.

“I was getting caught up on all my office work,” he told Sky News, when at 8.45am the call came in that “there was a possible hijack in progress 39,000 feet over Albany, New York, and heading southbound”.

“I immediately went out to the air traffic control room floor, and we were able to confirm with American Airlines that it was an actual hijacking,” as the airline had spoken to a staff member onboard the plane.

He then went to the air traffic control position and with his team tracked American Airlines Flight 11 southbound along the Hudson River which runs from the Adirondack Mountains upstate through Albany and almost directly south into the Atlantic Ocean on the border of New York and New Jersey.

“I quickly got on the phone with the New York approach control and the Newark air traffic control tower which overlooks the Hudson River in New York City.

“I asked the controller to look up the Hudson River to look for American [Airlines’] Boeing 767 that may attempt to land at Newark Airport, thinking that there was perhaps an emergency on board, and the aircraft may be partially disabled.

“Unfortunately [the controller] reported that the aircraft had struck the North Tower of the World Trade Center complex,” Mr McCormick said.

“Immediately after reporting that, a controller behind me hollered out: ‘I have another one’,” he remembered.

The second plane was United Airlines Flight 175 and the air traffic control team watched as it made a sharp turn and again flew towards the World Trade Center.

“During those 11 minutes when I was watching [Flight] 175 on the radar display, I attempted several times to notify authorities that another hijack was in fact in progress, the first aircraft was in fact an actual hijack, and our country was now under attack,” Mr McCormick said.

His attempts to notify the authorities were unsuccessful.

Just after 9am, United Airlines Flight 175 hit the South Tower of the World Trade Center complex.

“Myself and the manager at Boston centre had our military specialists contact Northeast Air Defence. Unfortunately, when the military specialists came out to tell me that the fighter jets were airborne – they requested the location, identification and transponder codes for the hijacked aircraft – the second aircraft had already hit the World Trade Center.”

A minute after the second plane had hit the second tower, Mr McCormick made the decision to shut down all New York airspace.

The impact was enormous. Many planes were force to turn around and go back to Europe while others were forced to land at alternate destinations in Canada due to the complete shutdown on aircraft entering New York airspace.

As the reality of what was happening became clear to Mr McCormick, he became angry: “I was very angry that someone would choose an industry that I love, and that’s aviation, to attack our country. I had never thought that aircraft would be used as weapons.”

But by the end of the day, he thought back to “how the men and women, the air traffic controllers across the entire United States rose to the occasion and cleared the skies of all the other aircraft, because that was in fact the only way that we could disarm the terrorists, was to remove their access to their weapons of choice”.

Shortly after closing down the airspace, the team was made aware of another potentially in-progress hijacking, this time of United Airlines Flight 93, which had departed from Newark Airport in New Jersey and was heading eastbound over western Pennsylvania.

“I got on a national teleconference with FAA (Federal Aviation Authority) headquarters in Washington DC, and a controller joined our teleconference from Washington Dulles Airport and was counting down miles from the White House for a fast moving jet aircraft.

“Fighter jets were also scrambled to perform an intercept at Washington DC. Unfortunately, they got over Washington DC, just as the aircraft hit the Pentagon,” he said.

“Shortly thereafter is when United 93 crashed in Shanksville, Pennsylvania, due to the heroic efforts of the passengers and crew onboard that aircraft.

“We were not aware of the struggles that actually occurring onboard,” Mr McCormick told Sky News, adding: “However, we were closely tracking the aircraft, so we could see that the aircraft was descending.

“And we knew there were not any likely targets in that area, so I made the assumption that there was a struggle in a cockpit and somehow they were able to force the aircraft into the ground, and it was at a high rate of speed too. The crater form by their heroic activities was over 30 feet deep.”

Nobody knows what the actual target selected by the terrorists onboard that flight was.

“The assumption, and the working assumption that we had that day, was that it was headed toward Washington. So more than likely, it would have been a visible target, a high-profile target similar to World Trade Center,” Mr McCormick told Sky News.

That most likely would have been the Capitol Building, according to Mr McCormick, as a very large and prominent building on top of a hill with “easy access to it from the air if you were to a plan attack vectors.

No 10 insists UK economy is strong despite IMF warning it will fare worse than any other in developed world – including Russia
Girl, 15, dies and boy, 16, in hospital after stabbing – as teen arrested for murder
Asteroid 2023 BU Just Passed a Few Thousand Kilometres From Earth. Here’s Why That’s Exciting
Labour pushes for 13,000 more neighbourhood police officers
Art Collector rolls to Pegasus World Cup win