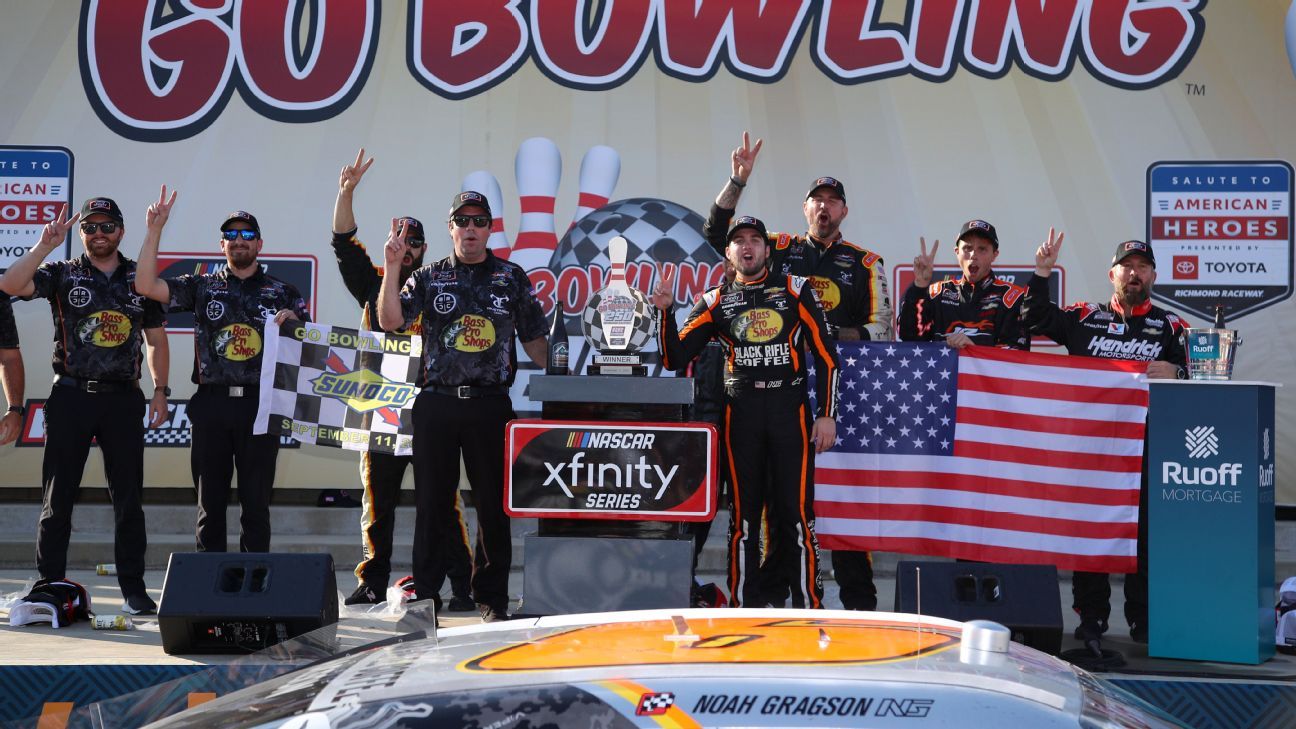 RICHMOND, Va. — Noah Gragson held onto the lead after a restart with seven laps to go and held off Justin Haley on Saturday to win his second consecutive NASCAR Xfinity Series race.

Gragson, driving in the race with JR Motorsports owner Dale Earnhardt Jr., ended a 49-race winless streak last weekend at Darlington. His second victory of the season and fourth of his career gives him momentum into the playoffs.

Just one race remains before the field is set for the 12-driver postseason.

“We’re starting to get momentum at the right time,” an emotional Gragson said, adding that the day was more about honoring the victims and heroes of the Sept. 11 terror attacks that were remembered on its 20-year anniversary.

“Today is not about this team or this win. It’s about everybody who lost their lives 20 years ago,” he said. “You know, you got a lot of heavy hearts. At least in America, we can come together on this day … but it’s an it’s emotional day.”

“We turned a bad day, gambled on the strategy and made it OK,” said Haley, whose team opted not to pit when most of the leaders did late and was able to rally. “I think that’s a championship caliber effort that we put forth.”

Nemechek, a regular in the NASCAR truck series, was driving for Sam Hunt Racing, a team owned by VCU graduate and former racer Sam Hunt, a native of Midlothian, about 15 miles from the track.

“I don’t think we had enough of a car to win there, but we definitely made the most out of the day,” said Nemechek, who leads truck series regular with five victories this season. “It’s nice to know that this is his home track and we were able to run really well.”

Earnhardt, making his annual lone start in the series, rose to as high as third by gambling on old tires with about 60 laps to go, but quickly faded to 21st because most of the race leaders had fresher tires. He and others got the caution they needed with just over 20 laps to go, but Earnhardt was caught speeding in pit road and only was able to rally for a 14th-place finish.

“We didn’t have the car I think that I was looking for and maybe I just couldn’t figure out how to get it around the track,” Earnhardt said before heading to change and be part of the broadcast team for the evening Cup Series race. “I hope I haven’t lost any credibility being 14th today,” he said.