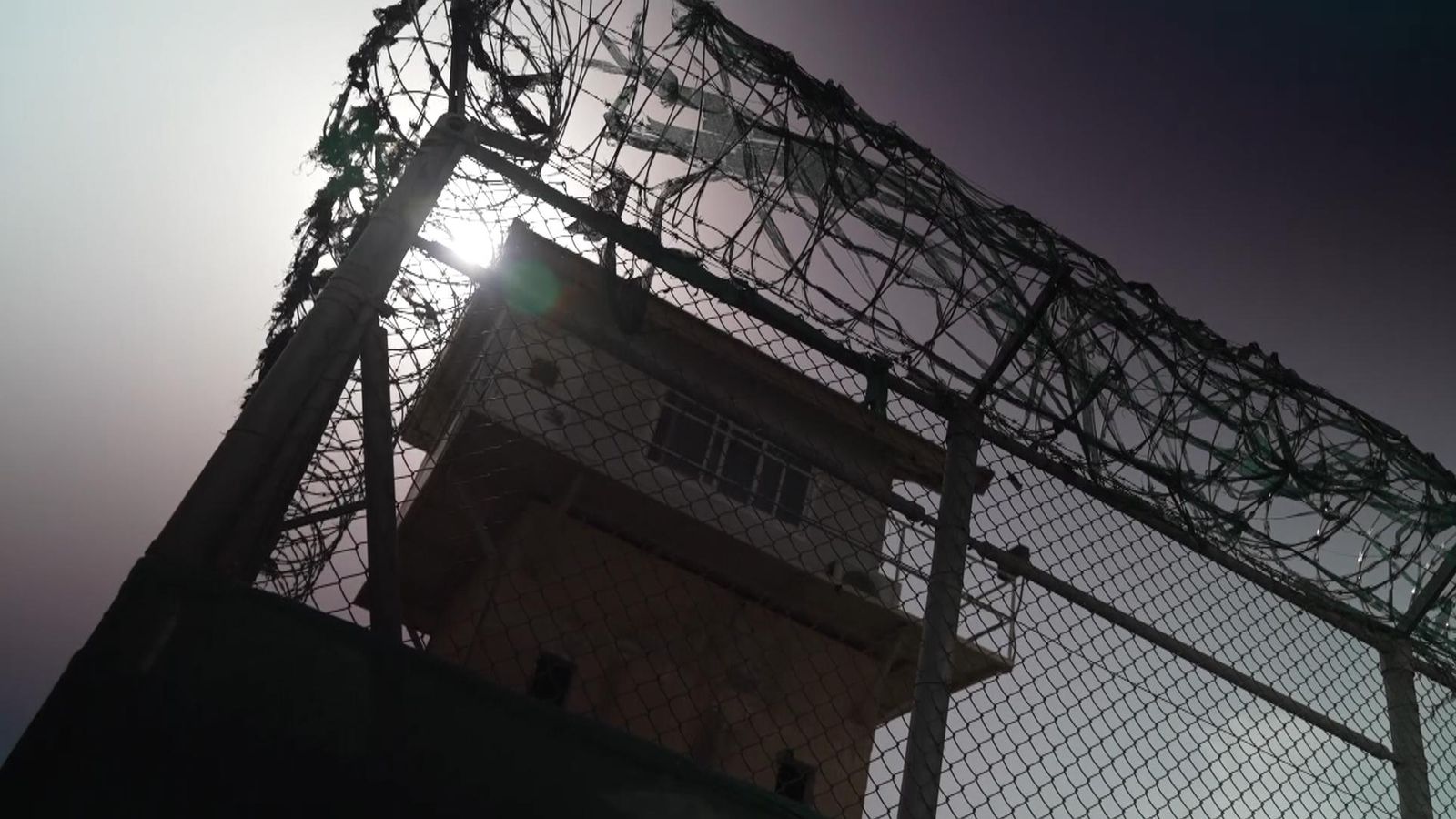 The notorious detention centre built by the Americans inside the huge Bagram military base is a terrifying place even when empty.

It’s known locally as Afghanistan‘s Guantanamo. Those who were held here feared they’d never leave. Many who did leave have never been the same since.

We’re the first Western television team to get inside the infamous prison. Both the Americans and their Afghan security partners are particularly sensitive about outside eyes seeing inside.

We squeeze through twisted sheets of corrugated metal where captives forced their way out hours after the capital fell to the Taliban and only weeks after the US soldiers left the base in a hurry. The Taliban unlocked all the cells holding those who hadn’t been able to break out themselves – among them hundreds suspected of being ISIS-K prisoners, from an offshoot of the so-called Islamic State terrorist group.

Now the Taliban is manning the gates of the huge sprawling military base which grew into a small city and was the coalition’s main military hub during its 20-year-long military mission. Originally built by Russian invaders in the 1950s, the Americans extended it to include a gym, a 50-bed hospital and the much-feared detention centre.

In the detention centre, they housed and interrogated the Taliban fighters they caught in battle or suspects they feared would end up on the battlefield.

Some were viewed as high-ranking terror suspects but there were also hundreds of ordinary Afghans – farmers, stallholders, students and Taliban sympathisers deemed dangerous or suspicious.

They were held, sometimes for years, without charges or trials. The stories of torture, water boarding, abuse, beatings and mistreatment were rife.

Former president Hamid Karzai told Sky News in an interview he gave before the Taliban pushed out the Ashraf Ghani government that the existence of the Bagram detention centre and the terrible stories emanating from within it infuriated him and caused multiple fallouts between him and the American politicians he dealt with.

He never forgave his American partners for what happened inside Bagram detention centre.

“They were meant to come here for peace, not bomb villages and hold captives,” he told us in July.

Every dark, dank corridor and every ransacked room in the detention centre holds a story – and all of them seem grim.

There are dozens of scattered photographs of terrified-looking men, many of them young, staring out at the camera dressed in their orange prisoner suits, pressed up against height charts.

The interrogation rooms are heavily padded to ensure they’re sound-proofed and the lack of electricity means we are stumbling around in the dark using the lights on our mobile phones, which adds to the eeriness.

In one storeroom we find black-out goggles and earmuffs, probably used for sensory deprivation alongside piles and piles of orange suits, next to cable ties of varying lengths.

We’re joined by groups of Taliban fighters who are seeing the centre for the first time and now stand on top of the cages peering through them just like the US soldiers once did.

The Talibs wind their way down the steps leading into a windowless bricked ground floor where there are a series of steel cages which each housed about 30 captives.

There’s a silence hanging over everyone looking at these scenes.

A few weeks ago, there were about 5,000 prisoners here and the noise must have been a constant cacophony of desperation.

The Talibs poke at the belongings – blankets and clothes and the odd orange suit left behind – and kiss every book of the Koran they see. One shakes his head.

Then spontaneously they pull out prayer mats and drop to their knees to pray for the thousands who lost so many years of their lives here.

Their American military guards believed they were routing the war on terror and holding some of the more dangerous men in the country – but without any due justice, many of the Afghans see what happened here very differently.

One of the praying Taliban fighters is in tears, constantly wiping his eyes. All of them are shocked and vowing revenge.

“All of the Talibs are ready to carry out suicide car bombs to avenge this,” one tells us.

“They’re not scared… We do this for Allah, not profit… America has lots of money but they’re not willing to blow themselves up. The Taliban will sit in a car with a bomb, drive it and set it off. We’ve made sacrifices before and after this we will again. We are suicide attackers.”

One of the Taliban who was held in Bagram for two-and-a-half years tells us he was tortured.

“Every time you broke one of their rules – like having a nail cutter – you were punished and tortured,” says Aziz Ahmad Shabir.

“They put me in a room alone for a month and made the cell very cold. Now I’m mentally sick and my mind is not working well… in the two-and-a-half years I was held here, a lot of damage was done to my head.”

He tells us he was a farmer when he was seized.

“Why were you arrested?” I ask.

“Because I’m a Muslim,” he replies, smiling.

We may never know the specifics of what any of them were accused of now but that assessment – which is now widespread in Afghanistan – is a dangerous one to be held against the coalition forces.

The Bagram detention facility may end up being known as one of the most successful recruitment centres for anti-Western terror networks.

Inside the conclave: How it works
PM plans to ban Channel migrants from appealing deportation
Record profits as Ryanair’s post-pandemic recovery accelerates
Concerns about golden eagles are partly prompting the redesign of a Scottish wind farm
Bill Gates says Elon Musk’s ambition to colonize Mars is not a good use of money