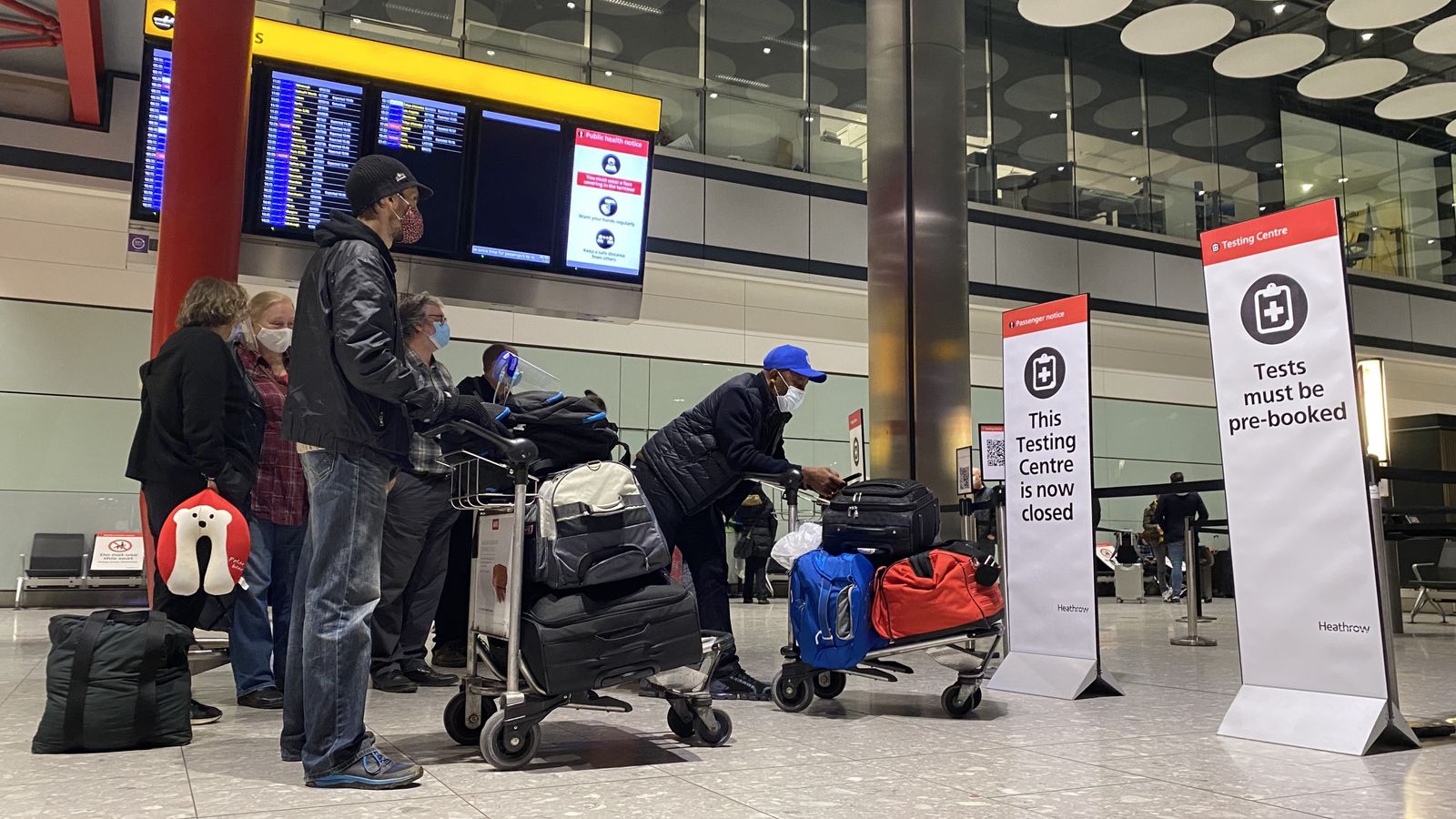 Sajid Javid has told Sky News he wants to remove the PCR test requirement for travellers returning from some foreign countries “as soon as I possibly can”.

The health secretary said he was aware of the cost for families holidaying abroad and that the measure should not be in place “for a second longer than is absolutely necessary”.

Mr Javid said he had asked officials to remove the rule “at the moment we can”.

Meanwhile, the health secretary also told Sky News he did not “like the idea” of vaccine passports and hoped to “avoid” introducing them.

“We have got a huge number of defences; of course we still want to remain very cautious, and there are some things that – when it comes to travel for example – there are some rules that are going to have to remain in place,” Mr Javid told Sky News’ Trevor Phillips on Sunday.

“But the PCR test that is required upon your return to the UK from certain countries, look, I want to try and get rid of that as soon as I possibly can.

“I am not going to make that decision right now, but I have already asked officials that at the moment we can, let’s get rid of these kind of intrusions, the costs that generates for families, particularly families just trying to go out and holiday.

“We shouldn’t be keeping anything like that in place for a second longer than is absolutely necessary.”

At present, passengers returning from green list countries, or amber list destinations if they are fully vaccinated, must take PCR tests on or before day two after they arrive in England.

Last month, the government announced the cost of NHS coronavirus tests for international travel were being reduced from £88 to £68 each, with the sum for two rests reducing from £170 to £136.

The travel industry, which has been hammered by the pandemic, has long complained that the costs of tests are too high.

In August, Mr Javid announced a “rapid internal review” of prices charged by government-approved companies after claims holidaymakers were being exploited over private testing.

Asked on Sky News whether Labour would support scrapping the need for PCR tests to be taken by those travelling internationally, shadow health secretary Jonathan Ashworth said his party “will have to see what the proposal is when it comes before Parliament”.

Mr Ashworth added that, “at first sight”, reports of the government plans “looks like a reasonable approach”.

The debate comes as the Welsh government announced that international travellers returning to Wales will be offered a wider choice of COVID test providers from 21 September.

The Welsh government said in a statement it would make the change from September 21 as “new standards and spot checks are being introduced, which will help to address long-standing concerns and issues about the market for PCR tests” for those returning to the UK.

Meanwhile, on the use of vaccine passports, Mr Javid said the government would not introduce the measure unless there is “no alternative”.

“I think if we went down the road of vaccine passports or vaccine certification as it is sometimes called, that is a big decision for any government to make,” the health secretary told Sky’s Trevor Phillips on Sunday.

“We have been looking at that, we have been open about that, instinctively I do not like the idea at all of people having to, let’s say, present papers to do basic things.

The health secretary said “rising” vaccination rates should be taken into account when making “a final decision” on whether vaccine passports should be used, adding: “But I hope we can avoid it.”

He continued: “I am not here today to rule that out, we haven’t made a final decision as a government.

Earlier this week, Culture Secretary Oliver Dowden said an extension to use of vaccine passports will be looked at if there is a “public health need”.

Mr Dowden told Sky News the government “want as few restrictions for as short a period as possible”, but that if the situation with coronavirus worsens, ministers will consider requiring vaccine certification to attend more venues to “protect” the public.

The culture secretary did, however, emphasise that the government is “always reluctant to impose further burdens on businesses unless we really have to”.

It came a day after Scotland’s First Minister Nicola Sturgeon announced that vaccine passports will be introduced in Scotland for entry into venues with large crowds from 1 October.

COVID-19 certification will be required to enter events such as nightclubs, music festivals and some football grounds, Ms Sturgeon said.

MSPs in Holyrood voted by 68 to 55 in favour of the measure which will be introduced from 1 October after all Scottish adults have had the opportunity to receive both COVID-19 vaccines, with two weeks having passed to allow the vaccine to take effect.

Speaking on Sky’s Trevor Phillips on Sunday, Ms Sturgeon said the measure “is part of a package of measures, it has a part to play”.

“Anybody who thinks there is one single magic wand solution to this virus probably haven’t learned a lot over the last 18 months, and secondly, any measure we take has upsides and it has downsides.”

She added: “This is a very limited scheme, it is in fact similar to what is being proposed in England as well, and it has a part to play.”

Tesla plans to ramp up Giga Shanghai production after surge in orders, report says
Europe is set to ramp up its oil war against Russia — and markets are bracing for more disruption
Ravens’ Tyler Huntley ignores critics with clutch Pro Bowl Games performance
War in Ukraine: ‘This is not where Russia planned to be’
Ukraine War: Divisive choice to send Leopard 2 tanks to Ukraine