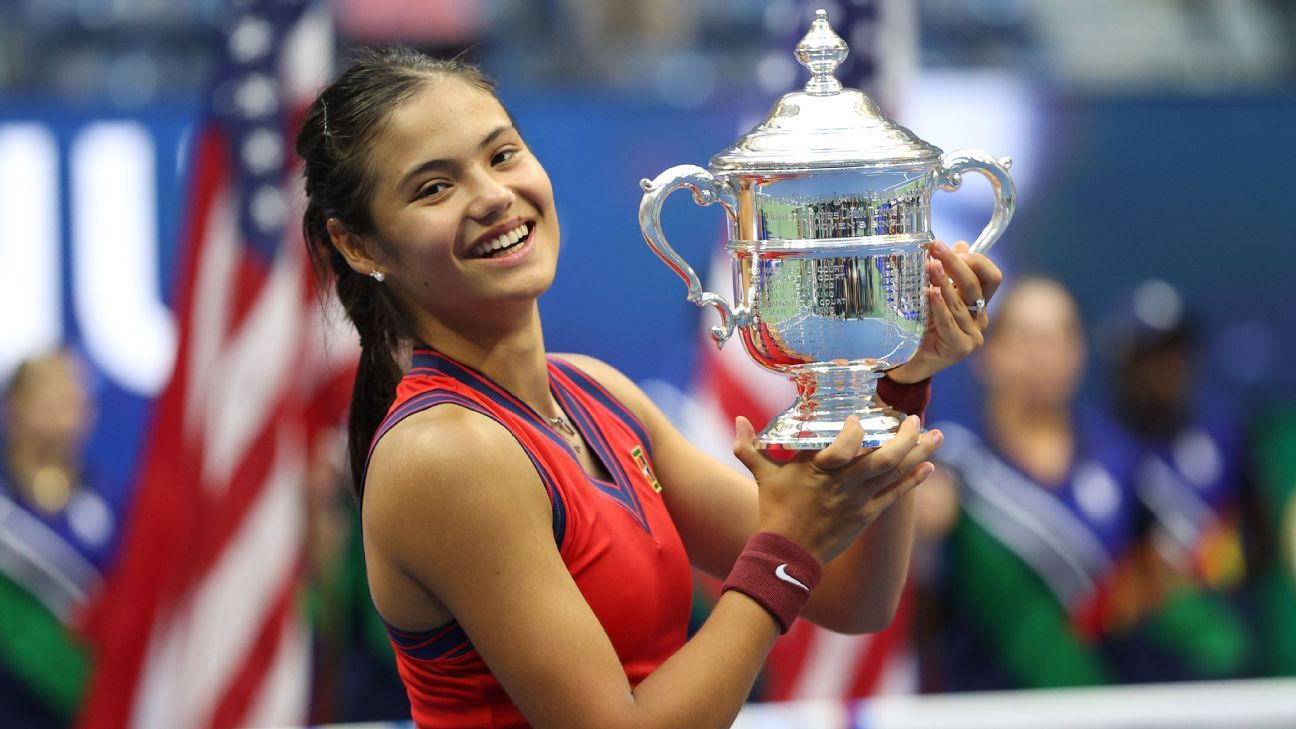 NEW YORK — The 2021 US Open is officially in the books, and it ended with titles for Emma Raducanu and Daniil Medvedev. Just as we all predicted, right?

Needless to say, it was one of the most unexpected and surprising tournaments in memory and provided unforgettable introductions to the next generation of tennis superstars.

Here’s what we learned from the year’s final major — and what we can expect from the rest of the 2021 season and beyond.

New era is upon us

Serena Williams wasn’t at the tournament this year. Nor was her sister Venus, or Roger Federer, or Rafael Nadal. But while the US Open was lacking in star power to start, by the end there were plenty of new faces who seem poised to ascend the tennis hierarchy in the next few years.

Sure, Novak Djokovic and his quest for the calendar slam and his 21st major title received nonstop headlines, but it was the rise of a group of talented teenagers that captivated the world.

In addition to eventual surprise champion Raducanu, who was ranked No. 150 in the world and had to come through qualifying to make just the second Grand Slam main draw of her career, 19-year-old Leylah Fernandez was the ultimate giant slayer throughout the fortnight, defeating Naomi Osaka, Angelique Kerber, Elina Svitolina and Aryna Sabalenka en route to the final. And 17-year-old Carlos Alcaraz recorded one of the biggest upsets of the tournament with a five-set victory over No. 3 Stefanos Tsitsipas.

Coco Gauff, 17, and Caty McNally, 19, the longtime fan favorite duo known collectively as #McCoco, reached their first major final. They eventually lost to Sam Stosur and Zhang Shuai in three sets but furthered cemented their status as one of the top teams to watch — and their friendship and confidence was still on full display despite the disappointing outcome.

“There’s no other person or player that I would rather do this with,” Gauff said. “I know that we’ll be Grand Slam champions eventually.”

Not to mention, the ever-so-slightly-older members of Gen Z represented well for the group, too: Felix Auger-Aliassime, 21, reached his first major semifinals; Jenson Brooksby, 20, gave Djokovic one of his toughest battles of the tournament in the fourth round; and 20-year-old Iga Swiatek became the only woman to reach the Round of 16 at every major this year.

There has been a lot of talk about the future of the sport as its biggest superstars all near the end of their illustrious careers, but it seems safe to say, tennis looks to be in very good hands — and this just might be the event which we will eventually look back on as the start of its next chapter.

Medvedev is the real deal

Not quite Gen Z but still very much a part of tennis’ future, 25-year-old Medvedev became the first player outside of the “Big Four” to crack the top two in the ATP rankings since 2005 earlier this year and had reached two major finals prior to the 2021 US Open, but his ability to win on the sport’s biggest stage, especially with Djokovic in the mix, was firmly in doubt.

On Sunday, Medvedev and his can’t-miss serve overpowered Djokovic as he made history of his own. Many have wondered who would eventually replace the Djokovic, Federer and Nadal atop the game, and now it seems Medvedev is the leading contender.

While the crowd was undoubtedly in support of Djokovic during the final, Medvedev won over new fans with his FIFA-themed “dead fish” celebration and his hilarious postmatch interview in which he said the victory would have to serve as his anniversary present to his wife because he hadn’t found time to buy anything else.

“The only thing I thought, ‘If I lose, I have no time to find a present.’ So I have to win this match.”

On Daniil Medvedev and his wife Daria’s third anniversary, he wins his first ever major title 👏 #USOpen pic.twitter.com/vhYuKqQ9Kr

So close, yet so far

Djokovic was one match away from joining Rod Laver as the only men in the Open era to achieve the calendar slam and winning his fourth major of the 2021 season. But Medvedev played the ultimate spoiler and dashed Djokovic’s dreams for history with a dominant, straight-set victory in front of a stunned Arthur Ashe Stadium crowd. As a victory would have also given Djokovic his record-setting 21st major title, breaking a tie with Federer and Nadal, there was much discussion about the win cementing Djokovic’s status as the GOAT.

He didn’t get the win or the milestone in New York, but even Medvedev said he was already convinced of Djokovic’s status.

“I never said this to anybody before but I’ll say it now: For me, you are the greatest tennis player in history,” Medvedev said to Djokovic during the on-court trophy presentation.

Of course, Djokovic remains the No. 1-ranked player in the world and will have several more opportunities for his latest Grand Slam trophy during the 2022 season — starting with the Australian Open, where he is a nine-time champion and will likely remain the favorite to defend his title.

Much was made about Djokovic’s failed attempt for the Golden Slam when he was unable to win a medal at the Tokyo Olympics, but two athletes did, in fact, record the elusive feat this year.

Diede de Groot and Dylan Alcott both became the first wheelchair athletes in history to win all four majors and Paralympic gold this year. Making it even more impressive, if that’s even possible, there were mere days separating the end of the competition in Tokyo and the beginning of the tournament in New York. Clearly jet lag is nothing for these two.

Alcott, who recorded his 15th career major singles title at the US Open, had an absolutely iconic celebration in front of the crowd on Ashe at the men’s final shortly after his win.

.@DylanAlcott chugging a beer out of his #USOpen trophy is an absolute MOOD 😂 pic.twitter.com/YCFJr4GTTj

Osaka, the defending champion, lost to Fernandez in the third round 7-5, 6-7 (2), 4-6 in front of a shocked crowd on Ashe and she was unable to hide her emotions on court or after the match. She threw her racket in frustration in the second set and later slammed it on the ground. When Fernandez forced a deciding set, Osaka left the court for a bathroom break with her head covered in a towel.

She was tearful after the match and admitted tennis was no longer bringing her joy, saying she was considering taking an indefinite break from competition.

“I feel like I’m kind of at this point where I’m trying to figure out what I want to do, and I honestly don’t know when I’m going to play my next tennis match,” Osaka said. “I think I’m going to take a break from playing for awhile.”

Her news conference abruptly ended. Osaka, 23, has not further clarified her plans for the rest of the season, but remains on the entry list for next month’s pandemic-delayed BNP Paribas Open in Indian Wells, California.

It has been a challenging few months for Osaka, who opened the 2021 season with a title at the Australian Open. She withdrew from the French Open after her first-round win due to controversy surrounding her decision to opt out of her media obligations and then skipped Wimbledon. She was given the honor of lighting the torch during the opening ceremonies at the Olympics in her native Japan but lost in the third round of the competition.

There has been an outpouring of support for Osaka from the tennis community and beyond, and her peers and fans have encouraged her to take her time to get healthy and happy before she makes her return.

When the US Open announced it would be allowing 100% capacity for fans, there was some skepticism as to the feasibility of having such massive numbers during the ongoing pandemic, despite a late vaccination requirement being added — for fans that is; players still have no such thing — just days before the event got underway and there being an indoor mask mandate.

However, not only were there no reports of an outbreak linked to the tournament, but the fans did more than their part in impacting matches and cheering on their favorites to victory.

Many players — perhaps most notably Fernandez, Djokovic, Alcaraz and Shelby Rogers during her upset win over top-ranked Ash Barty — were amazed by the crowd and credited them at varying points for their help in securing victories.

“The crowd is next-level this year,” Rogers said on court after her win over Barty. “You’ve picked who you want to win, so thank you for picking me tonight.”

A year after there were no fans in the stands at the tournament, the US Open became the first major to allow a capacity crowd. According to the USTA, there were 631,134 fans in attendance throughout the tournament. While not quite the record-setting numbers of 2019 (737,919), it was still a pretty impressive turnout amid the circumstances.

While it’s impossible to predict what will happen going forward, it was a welcome dose of normalcy after so many months of uncertainty and uncharacteristic silence.

The Sims adds top surgery scars and binders to character choices
Santos’ lies cast harsh spotlight on a powerful Republican
Labour pushes for 13,000 more neighbourhood police officers
Westminster’s ‘nepo babies’ are here to stay – whether we like it or not | Adam Boulton
Memphis ‘Scorpion Unit’ under scrutiny after Tyre Nichols’ death