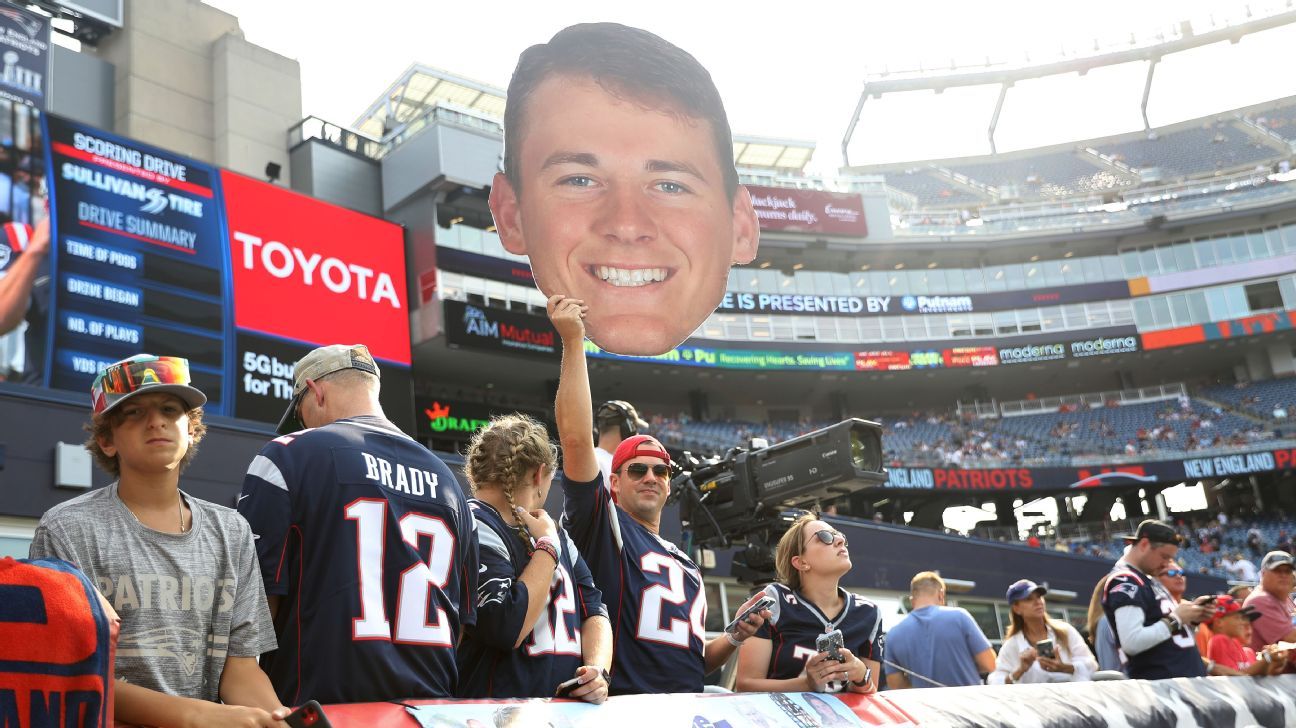 For the first time in the 62-year history of the series, the Patriots and Jets will start rookie quarterbacks against each other — Mac Jones and Zach Wilson, respectively. These aren’t just any rookies. They’re both first-round draft picks and are considered the long-term answers at the position.

What has each organization learned about its quarterback?

Reiss: That Jones can handle pressure — first as the potential franchise quarterback in the post-Tom Brady era, and then on the field. The Miami Dolphins blitzed Jones 45% of the time in the season opener (second-highest total in the NFL), and Jones was 9-of-13 with a touchdown when under duress, according to ESPN Stats & Information research. Patriots offensive coordinator Josh McDaniels was complimentary of Jones’ opening performance (29-of-39 for 281 yards, 1 TD, 0 INT).

“They certainly challenged us with a lot of different looks and pressures. That’s to be expected, and I thought Mac handled most of that very well,” McDaniels said. “His communication, I thought, was clear. It was consistent. He was loud.”

Overall, Jones has earned the respect of teammates and coaches with a veteran-like approach — always working and keeping an even keel.

Cimini: That Wilson can take a punch. He was hit nine times by the Carolina Panthers in Week 1, including a two-man body slam late in the game, but he never flinched. You never know about a young quarterback until you see him in game action — how he responds to getting hit. Wilson wasn’t knocked down in the preseason and he certainly didn’t get roughed up last season against BYU’s cream-puff schedule, so it was an unknown going into the regular season. His resilience impressed teammates. “Man, he’s a tough dude,” Jets wide receiver Corey Davis said. “He got hit a lot. Just to see how he reacted, there was no frustration, no anger. He was just poised.” His overall numbers under pressure weren’t good (3-for-13, 87 yards, 1 TD), but he improved a lot in the second half.

And the biggest concern for these rookies this season will be …

Reiss: Jones took nine hits in the season opener, and Patriots center David Andrews said the team needs to do a better job taking care of him. “We were disturbed by it,” added offensive line coach Carmen Bricillo. Jones is 6-foot-3 and 214 pounds, wears a protective brace over his left knee and hasn’t experienced the benefits of a full NFL offseason program, so it isn’t a stretch to say preservation is a top concern. That ties in to the challenge for all rookies in a sense — a longer 17-game NFL season compared to college.

Cimini: The obvious answer is protect him better, but it goes deeper than that. The Jets can’t let Wilson be victimized by the Sam Darnold Syndrome — i.e., improper QB development. They have surrounded Wilson with a competent set of wide receivers, which is a start, but they have to be careful not to put too much on his plate. They have to feature the running game and make the offense as balanced as possible. There will be a temptation to go the other way and become pass-happy, especially if they’re playing from behind, but coach Robert Saleh can’t lose sight of the big picture. He can’t let Wilson be this year’s Joe Burrow (Cincinnati Bengals), exposing him to injury by having him throw 40 times a game. For Wilson’s sake, you hope this regime doesn’t repeat the sins of the past.

Tell us one thing people might not know about Mac & Zach:

Reiss: I’m going to give you a few to cover the bases. His birth name is Michael McCorkle Jones, as McCorkle is his mother Holly’s maiden name. He and his girlfriend, Sophie, have a Maltipoo dog named Rose. And Jones practices breathing exercises on the sideline during games to calm himself down. In many ways, the New England region is still learning about Jones and what makes him tick, and these are a few things that have come up in recent weeks in interviews and television broadcasts.

Cimini: When Wilson puts his mind to something, he usually accomplishes it. In college, he decided he wanted to teach himself how to juggle. He made himself into a really good juggler. When he was younger, he was diagnosed with attention deficit hyperactivity disorder (ADHD). Classroom work was a challenge in college, but he overcame it. He never let it affect his ability to learn football plays and concepts. He has been known to spend hours watching film and preparing for games.

How do the matchups look for this game?

Jones vs. the Jets: Just as Jones faced a lot of blitzes against the Dolphins, he should expect the same on Sunday. The Jets blitzed 41.7% of the time in their season-opening loss, according to ESPN Stats & Information research, which was the fifth-highest total of any team in Week 1.

Wilson vs. the Patriots: Rookie quarterbacks don’t have much success against Bill Belichick-coached defenses. The Patriots are 9-1 in their past 10 games against rookies, although they lost the most recent one (Week 15 in 2020 to Miami’s Tua Tagovailoa). The last Jets rookie to beat a Belichick-led team was Geno Smith in 2013.

On Wilson’s debut: “For Zach, the game was very fast for him early on physically, but his eyes were fast, which was a good thing. He realized that while college football windows may be the same size as the NFL, they close faster. It’s mainly because underneath defenders are longer. The interception was a perfect example. That being said, I was really impressed with his toughness.”

War in Ukraine: ‘This is not where Russia planned to be’
‘He wants world dominance’: Pompeo reveals who he thinks is more dangerous than Putin
Keanu Reeves ‘alarmed and distressed’ by alleged trespasser who ‘slept in his garden’
Why a British star’s Oscar nomination has sparked a storm of controversy
Intel executives take pay cuts after disastrous earnings