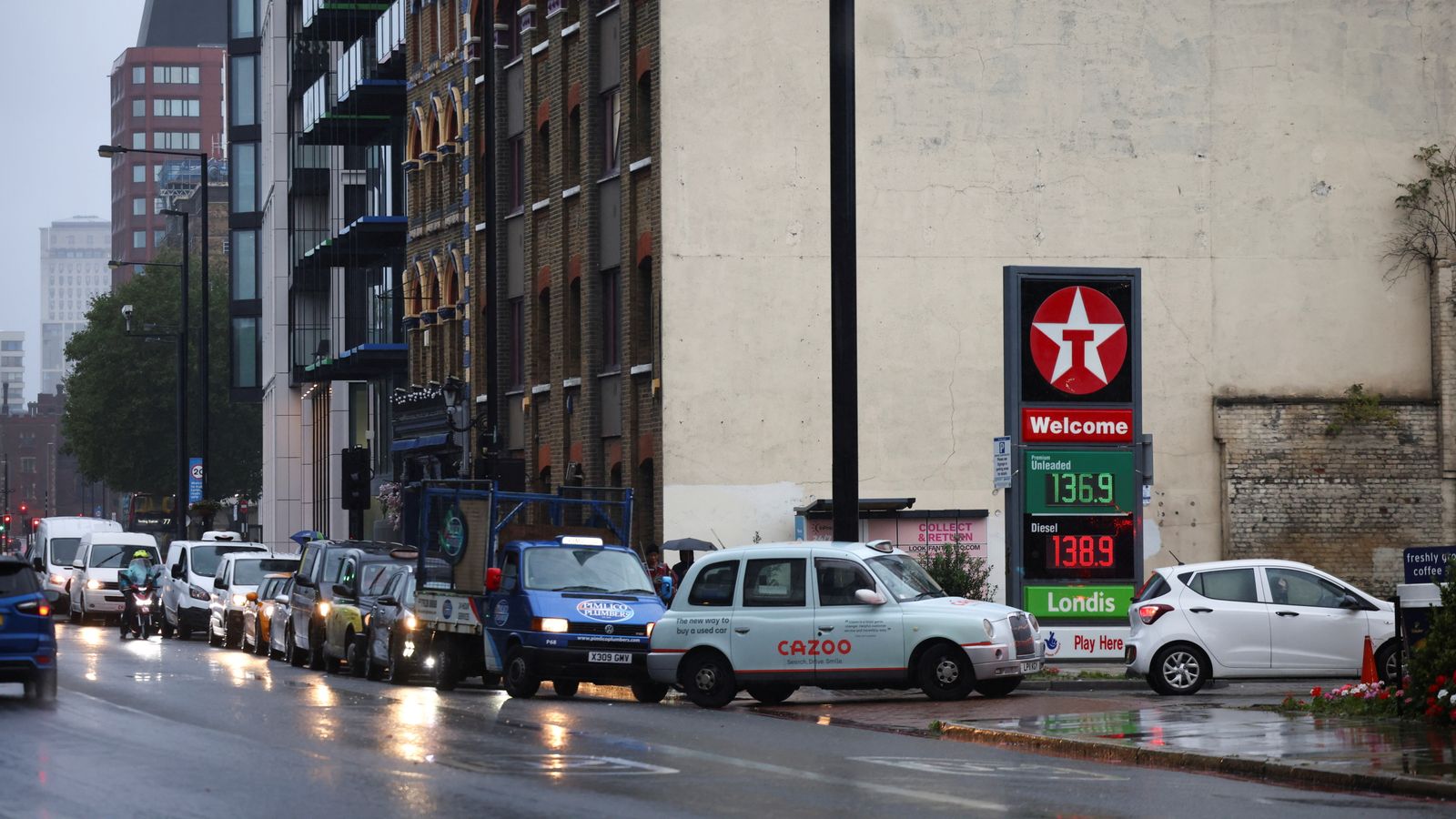 Petrol retailers hoping for a return to normal after motorists drained pumps over the weekend have faced yet more forecourt queues – as parts of the economy started to feel the strain.

In some areas, up to 90% of pumps ran dry, according to industry estimates – and there was little sign of the panic-buying diminishing on Monday, with consumers apparently ignoring pleas to stop.

That left industries from taxi drivers to the meat processing sector – and even non-league football – facing difficulties and prompted calls for healthcare workers to be given priority access to fuel. 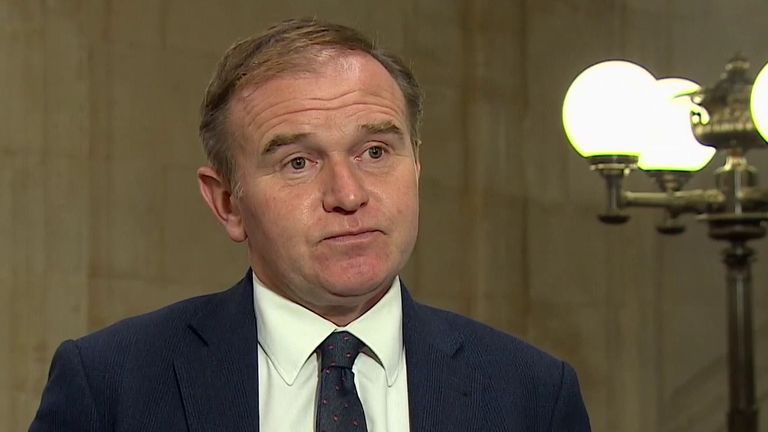 No plans for army drivers to ease fuel crisis

The British Medical Association said there was a real risk that some would not be able to get to work.

But the Petrol Retailers’ Association (PRA), representing two-thirds of all UK forecourts, said that with many drivers’ tanks now full after the weekend it was watching for an “easing of demand”.

The government said there were no plans to bring in the army to drive lorries to deliver fuel to petrol stations though environment secretary George Eustice said the military’s contingencies unit was always on standby.

Mr Eustice said: “There does come a point – as we saw during a previous episode of panic buying during the pandemic on food – where things settle down and people get used to it, and return to life as normal again.

“The sooner people do that the better.

“The only reason we don’t have petrol on the forecourts is that people are buying petrol when they don’t need to.” 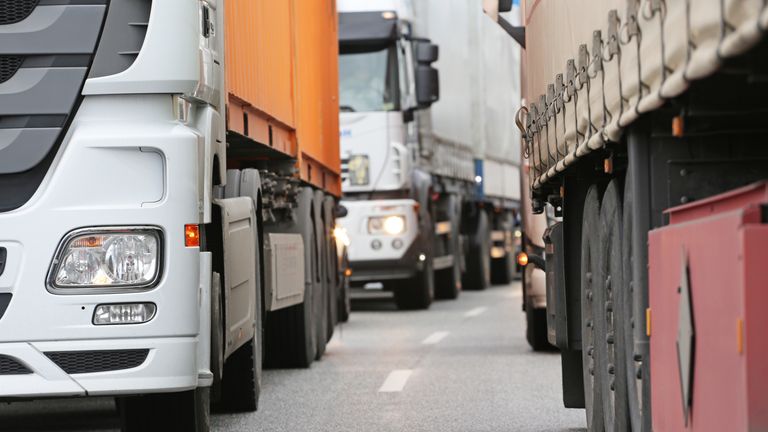 The crisis mushroomed after the disclosure last week that a few petrol stations had seen supply disrupted, due to the nationwide shortage of HGV drivers, prompting widespread panic-buying.

It was still in evidence for a fourth day on Monday, with roads gridlocked as motorists queued for more than an hour in some cases, with lines of cars trailing out of forecourts onto the public highway.

Some petrol retailers – Asda and EG group – have been restricting fuel sales to £30 a time.

Even if the buying frenzy does abate, motorists face a further headache as the price of Brent crude on international oil markets continued to climb, reaching a three-year high of just under $80 a barrel – likely to result in higher prices at the pumps to come.

Meanwhile the RAC, the motoring organisation, said it was aware of “a small number of retailers taking advantage of the current delivery situation by hiking prices”.

The industry has pleaded with consumers to stop panic-buying and sought to assure the public that, with fuel stocks at refineries and terminals at normal levels, it is only a shortage of lorry drivers that has restricted deliveries of fuel.

Gordon Balmer, executive director of the PRA, which represents independent fuel retailers, said: “Delayed deliveries and unusual buying levels have led to supply pressure and a number of forecourts’ stockouts.

“It is unlikely that the vehicles filled over the weekend will need refuelling again soon.

“As a result, we will watch carefully for a possible easing of demand and normalising of forecourt stocks over the coming days.”

RAC spokesman Simon Williams noted however that the panic-buying over the weekend meant every forecourt in the country now needs to re-stock at the same time, putting “unbelievable pressure on the supply chain”.

He added: “We urge drivers to only take the fuel they really need.

“Stock piling in containers only makes the situation worse for those who desperately need fuel as well as potentially causing unnecessary fire risks if not stored correctly.”

Among industries feeling the knock-on effect was the beleaguered meat-processing sector – already buffeted by recent crises such as a shortage of the carbon dioxide used to stun animals for slaughter as well as an exodus of foreign workers.

The British Meat Processor’ Association (BMPA) told Sky News that the petrol crisis had resulted in some companies missing key staff such as vets and meat inspectors.

“So far it has not caused any plants to completely shut but we are monitoring the unfolding situation very carefully,” the BMPA said in a statement.

Meanwhile one private hire taxi firm emailed clients to say its services could be affected to up to 48 hours, warning of delays and that it would not be able to honour some long-distance bookings.

Make UK, the manufacturers’ organisation, said there were anecdotal reports of some firms starting to have problems with the delivery of finished products – though it was unclear whether that was to do with fuel or the wider HGV driver problem that lies behind it.

The crisis has even taken its toll on the sporting world. Non-league Lewes Football Club said that owing to the fuel shortage and the difficulty for players, coaches and officials to attend the game, its mid-week fixture against Carshalton Athletic would be postponed.

The government’s attempts to address the issue have included plans to allow 5,000 more lorry drivers into the UK under temporary three-month visas and the suspension of competition laws to allow fuel industry to work together to address shortfalls.

But they have received a lukewarm response from industry, with complaints that the moves fail to address long-term problems.

Rod McKenzie, head of policy for the Road Haulage Association – which says there is a shortage of 100,000 drivers – told Sky News that the temporary visa move “just about scratches the surface”.

Farmworker accused of shooting dead seven colleagues ‘was angry over $100 repair bill’
Why we might have to wait until 2024 to see Artur Beterbiev vs. Dmitry Bivol in a must-see matchup
Why the problem of prepayment meters won’t go away for vulnerable energy customers
Avis has new T&Cs for renting its EVs, and they’re a little weird
NASCAR bans Chastain’s wall-hugging move