Sir Keir Starmer batted away hecklers during a mammoth speech in which he used his personal experiences to show off his human side as he announced a key climate change policy.

Doreen Lawrence, mother of murdered teenager Stephen Lawrence, introduced Sir Keir before his conference speech by thanking the Labour leader for helping prosecute his murderers when he was a barrister.

During the 90 minute speech, which was his first in-person conference address since he became leader, he hit out at the government, referenced his parents throughout and announced a plan to retrofit millions of homes.

Following five days of ups and downs in Brighton, including successfully getting a new way of voting for a leader through, he put Labour forward as the next party to lead the country. 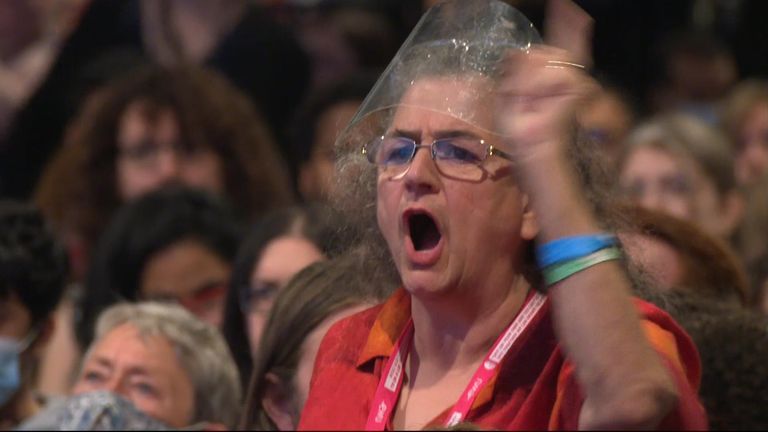 But he was also heckled by those who may be bigger fans of his predecessor, Jeremy Corbyn, who has criticised Sir Keir at fringe events this week.

However, he brushed them away by saying “shouting slogans or changing lives, conference?” – to which he got cheers from the audience.

He spoke of not being from a privileged background, of his father being a tool maker in a factory and his mum being a nurse in the NHS and her getting a rare arthritic disease for which he could “hardly convey to you the emotion of seeing your mum in that condition”.

For a leader who has often been accused of failing to show off his personality and any emotion, it appeared important for Sir Keir to connect on an emotional level with Labour members, who listened intently.

He also spoke of being a lawyer and chief prosecutor and how that has helped his approach to politics.

John and Penny Clough, the parents of murdered nurse Jane Clough, were in the front row of the audience and Sir Keir told of them coming to him to get justice for her and how they changed the law – and how crime “will always be a Labour issue”.

Recognising he came into politics “late in life”, the Labour leader said he was not a career politician and said he was nothing like Boris Johnson, who he said was waging war on traffic cones while he was prosecuting Stephen Lawrence’s murderers.

He also said in 2010 he was helping put terrorists behind bars while Mr Johnson was defending the right not to wear a cycle helmet.

“It’s easy to comfort yourself that your opponents are bad people, but I don’t think Boris Johnson is a bad man, I think he is a trivial man,” he said.

He promised Labour will “always fund the NHS properly” and would shift the priority of the NHS away from emergency care to prevention, including funding mental health as much as physical health.

“Labour will guarantee that support will be available in less than a month,” he said.

That would include recruiting 8,500 more mental health professionals and ensuring every school has specialist support and communities have mental health hubs.

He said Labour will launch the most ambitious school improvement plan, including ensuring children leave school with good qualifications and who are ready to work.

Theatre, drama and music will not be allowed to collapse, he said as he mentioned he had music lessons with Fat Boy Slim at school.

On the economy, Sir Keir said Labour would support small businesses and invest a minimum of 3% of GDP in science and research and development.

He said the finances inherited from the Conservatives “will need serious repair work” but the approach to taxation will be governed by taxpayers getting the best value for money.

Sir Keir’s shadow cabinet ministers have announced a raft of new policies this week and he added to that by saying climate change – which got a big clap – would be tackled by retrofitting 19 million homes over a decade to save families more than £400 a year on energy bills, with a £6bn a year investment. 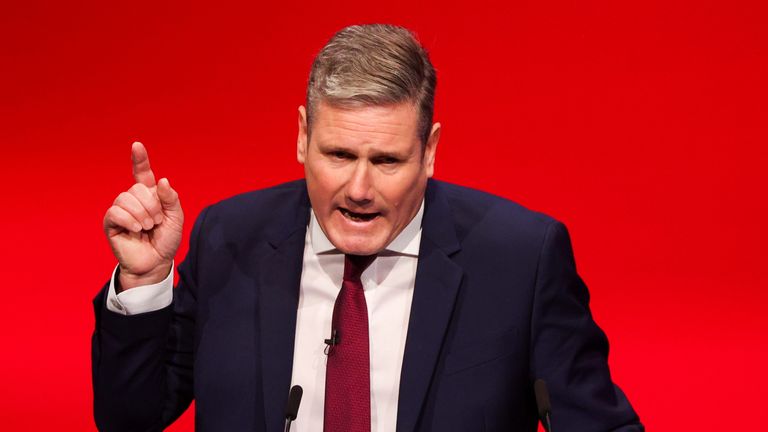 Starmer wants ‘serious’ plan for government from his party

And he hit out at Scottish First Minister Nicola Sturgeon, saying the SNP and the Tories “exploit the constitutional divide” so he was worried about the future of Wales within the Union.

After his speech, the Labour leader was joined by his wife, Victoria, on stage and they left the conference hall to the Fat Boy Slim song “Right here, right now” – plus a standing ovation.