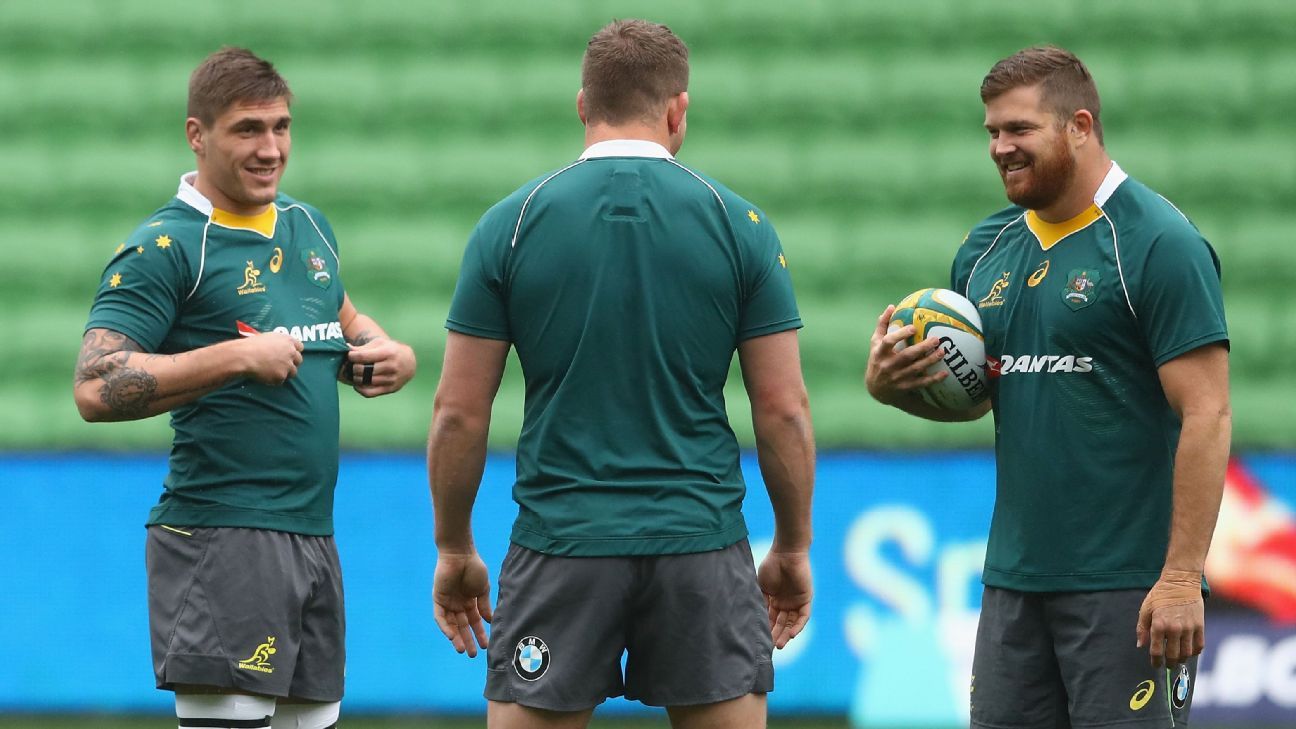 Thirty-eight-year-old prop Greg Holmes has seen a few different incarnations of the Wallabies in his time.

The Queenslander made his Test debut way back in 2005, in the final year of Eddie Jones’ reign, and has since played under both John Connolly and Michael Cheika within the national setup.

And he will now wear the jersey under Dave Rennie, after the Kiwi handed him a spot on the bench for Saturday’s closing Rugby Championship Test against Argentina on the Gold Coast.

Holmes’ selection caps a remarkable turn of events after he admitted to having a “couple of beers” beside Rennie at the Bledisloe Cup lunch in Perth at the end of the August. At that point, Holmes was only interested in coming down to Wallabies training to observe some scrummaging sessions to help further an early foray in coaching.

But a month on, he is now set for a first Test since the 2015 Rugby World Cup. And Holmes has already seen something different about Rennie’s own version of the Wallabies.

“I think it’s a really settled team and they’re good across the board now,” Holmes said. “I remember when I first started our set-piece was an issue and we had a really sharp backline; at times our forward pack starts going okay and our backline misfires. At the moment I see our full team firing.

“I think we’ve got a forward pack that can match it with anyone in the world at the moment and we’ve got some sharp backs with Quadey [Cooper] pulling the strings there; he’s done an incredible job. And the depth, there seems to be depth in all the positions at the moment. And Dave and the staff are running an incredible program; everyone’s on the same page and everyone’s working towards the same thing.

“When you can get a team firing like that they can beat anyone, and I think this team can.”

Holmes is well placed to compare different Wallabies eras even though he endured a Test drought between 2008 and 2014, when he was overlooked first by Robbie Deans and then again in Ewen McKenzie’s short stint.

But the reality is that Rennie’s Wallabies have so far only strung three wins together.

They can, however, sign off their domestic Test season with another victory over Argentina — who on Thursday lost six players for selection because of a border breach — which would result in a 6-4 return on Australian soil for 2021.

The chance to build on that potential record will then come in Japan, against the Brave Blossoms, before Tests against Scotland, England and Wales to round out the year.

While recalling a 38-year-old prop might, on the surface, suggest the Wallabies are struggling for personnel, the reality is that Holmes’ inclusion has come about by injury and family commitments in the front-row.

Elsewhere, the Wallabies have built depth, evidenced by this weekend’s selection of Pete Samu at No. 6, the Brumbies back-rower finally getting his chance after Lachie Swinton and Rob Leota had previously been preferred on the side of the scrum.

And Sean McMahon is now back to offer further competition among the replacements.

“There’s certainly belief within the group, we’ve got a good understanding of our game and the effort required to implement that game,” Rennie said when asked if he could see confidence growing within his squad.

“We’re just working hard; all the things that we’ve been doing for the last 18 monthsx, we’re trying to develop our skill set and trying to develop our game awareness, and we’re certainly a very fit side now. And we’ve got genuine competition for places, I think that’s helping; guys understand that they need to be at their best otherwise they could lose their spot to someone else.

“So I think that’s been really important. So we’ve got belief in each other, but respect’s earned daily; we’ve got to front again on the weekend otherwise everything we’ve done over the last few weeks is undone.”

Holmes accepts he is probably a long shot to head away on the spring tour — the prop’s wife is heavily pregnant — but the other 22 Wallabies on show at Cbus Super Stadium have one last chance to impress before Australia’s spring tour squad is announced at the end of next week.

Rennie confirmed each of Quade Cooper, Samu Kerevi and Sean McMahon have been cleared to contest the entirety of the tour before returning to their Japanese clubs for preseason. The Wallabies are likely to take away a squad of around “35 or 36”, Rennie confirmed on Thursday.

But Saturday night’s date with the Pumas will in all likelihood be a second “last Test” for Holmes, capping one of the more unusual but hugely satisfying international returns in recent memory.

“He’s done well,” Rennie said of Holmes. “Obviously with Allan [Allaalatoa] heading home, Pone [Fa’aumasili] injured, we wanted an experienced tighthead from a scrummaging perspective, so we brought him into camp in Perth and he’s been with us for the last few weeks here and he’s ready to go. We think he’ll do a job for us..

“We’re rapt for him. When the team was announced, I didn’t tell Holmer that he was in the mix; he was already applauding for the guy who he thought was on the bench, and he got a bit of a shock from it.

“So it was a massive roar from the lads because he’s such a popular character. We’re really pleased for him but it’s not a sentimental selection; it’s based on what we need, and we think he can do a job for us.”