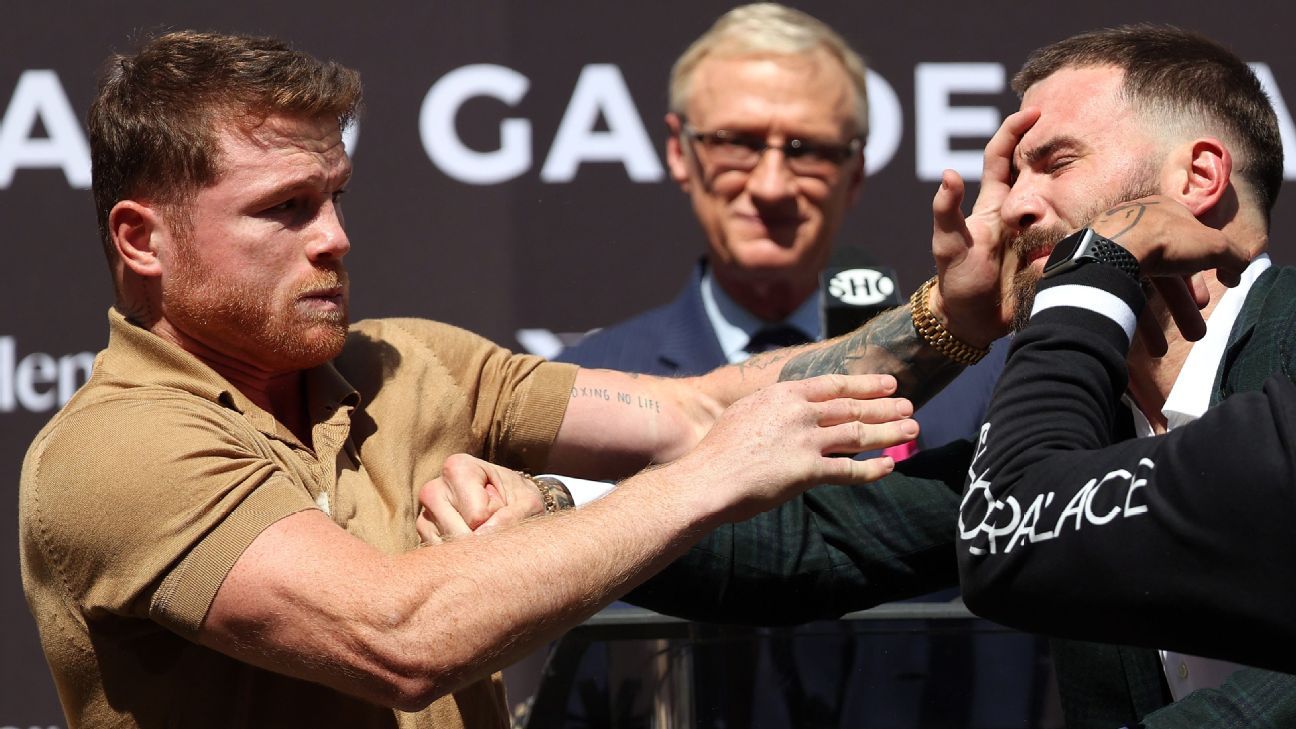 Oleksandr Usyk’s upset victory over Anthony Joshua kicked off a hectic fall season for the sport of boxing. The biggest stars will return over the next few months, and in many cases they’ll be competing against top-level competition rather than doing the stay-busy fights that have become all too common.

Teofimo Lopez and George Kambosos were scheduled to be up first but a second delay resulted in this bout being reset for Oct. 16. Lopez has plenty of options if he’s able to get past Kambosos, including the man he beat for the belts, Vasiliy Lomachenko.

Terence Crawford gets his big matchup against Shawn Porter in November, and his teammate Jamel Herring has a similar challenge in rising star Shakur Stevenson. So which bout has more potential?

And after last week’s chaotic press conference, the world will be watching on Nov. 6 when Canelo Alvarez tries to become undisputed super middleweight champion. With Alvarez and Caleb Plant exchanging shoves, fists and words, how impactful was their first encounter?

Better matchup: Crawford vs. Porter or Herring vs. Stevenson?

Terence Crawford explains what took so long to get his upcoming fight with PBC’s Shawn Porter done.

Coppinger: Don’t get me wrong. Herring-Stevenson is a compelling matchup, and the first genuine test for one of boxing’s best young talents. But if Herring doesn’t exert his size advantage and apply nonstop pressure on Stevenson, it could be another dull Shakur fight.

Crawford-Porter, on the other hand, is a guaranteed barn burner between two of the best fighters in a stacked welterweight division. It also serves as Crawford’s first true measuring stick after facing so many solid yet unspectacular opponents.

Porter is one of boxing’s most reliable action fighters. His relentless pressure and incredible self-belief ensures that all his bouts are entertaining. Porter’s loss to Errol Spence Jr. was one of the best fights of 2019. His 2016 loss to Keith Thurman was equally thrilling. Porter’s fights with Danny Garcia and Kell Brook were also action-packed affairs.

Crawford, too, is always in exciting bouts, and the pound-for-pound great is one of the sport’s best finishers. Even against overmatched opponents such as Kell Brook and Egidijus “Mean Machine” Kavaliauskas, Crawford pressed the action.

Against his toughest opposition yet, there’s no doubt we get one of the best fights of 2021 in Crawford-Porter, and maybe even an instant classic.

Coppinger: When looking back on the career of an all-time great like Manny Pacquiao, a fighter whose dominance spanned four decades, it’s difficult to select just one performance that stands above the rest.

There’s his blistering beatdown of Oscar De La Hoya that launched him to superstardom. The hellacious thrashing he handed to Antonio Margarito, a victory that not only left the Mexican with a broken orbital bone, but also landed Pacquiao a title at 154 pounds after winning his first belt at 108 pounds.

Two performances, however, stand above the rest: the 2009 stoppage of Miguel Cotto, Pacquiao’s first welterweight title fight victory, and the 2003 destruction of Marco Antonio Barrera.

The win over Cotto was perhaps Pacquiao at the height of his powers, but the most impressive performance must be his landmark win over Barrera in their first meeting.

Entering the fight, Pacquiao was still an unknown commodity, a 122-pound champion who had never headlined on HBO. He was installed as a 4-1 underdog against the Mexican legend, and with good reason: Barrera was riding an eight-fight winning streak and was widely considered the third best pound-for-pound boxer in the world.

During that stretch the hall of famer beat “Prince” Naseem Hamed, avenged his loss to Erik Morales and also defeated Johnny Tapia and Kevin Kelly. None it mattered. The fight with Pacquiao wasn’t remotely competitive, with “Pacman” punishing him from the opening bell to the merciful end in Round 11. It was a statement victory that proved Pacquiao was a force to be reckoned with and placed him on pound-for-pound lists. It also gained him the lineal featherweight title. He never looked back.

Which fighter has the more intriguing 2022 outlook: Ryan Garcia or Gervonta Davis?

Baby: Give me Davis. So far, he has shown the higher upside, having won a world title at junior lightweight and a secondary belt at lightweight. He has the necessary power and has shown strong development in recent years to become a true contender at junior welterweight.

However, Davis and Garcia both need to increase their level of competition.

Davis made his debut in the 140-pound division with a knockout over Mario Barrios for a secondary WBA world title. It was a good showing against an opponent who was better than his ranking.

But there’s a big issue with Davis — he’s not an actual champion at junior welterweight. Josh Taylor is the undisputed champion after he beat Jose Ramirez in the summer to unify the four major belts. Davis hasn’t faced a challenge of that caliber yet.

That doesn’t mean he’s not capable of doing it, however. The uncertainty about where he stands in the division makes him one of boxing’s most intriguing fighters. Taking on a big challenge early in ’22 will hopefully bring the situation a little clarity.

Raimondi: Maybe someone might take this as a hot take, but how can I not say Paul? Silva is one of the greatest MMA fighters to ever live, and his streak of 16 straight UFC wins might never be broken. But Silva is 46 years old now and in his own sport of MMA he only won once in his last nine fights before his release request to the UFC was granted last November.

I’ve absolutely adored Silva’s run in boxing this year. How can you not be entertained by “The Spider” going into Mexico and beating Julio Cesar Chavez Jr. and then knocking out Tito Ortiz in under two minutes? Silva is a special, special fighter. One of the iconic combat sports athletes of all time. The man is a savant.

But if you’re asking me about potential, I have to say Paul. Of course. He may never achieve in boxing what Silva did in MMA — few will — but Paul is 24 years old. At 4-0 in the ring, Paul is arguably the most talked about boxer in the world and he’s already one of the highest-selling prize fighters in combat sports. It seems like every weekend there are at least two or three boxers or MMA fighters calling Paul out after their victories. That’s not just because Paul might be an easy fight; it’s also because fighting Paul is a massive payday and more exposure than they have ever gotten in their career.

Paul is the new Conor McGregor — the fighter every other fighter wants to fight to up their profile and make millions.

Look, no one knows for sure how long this novelty boxing trend will last. But you must give credit to Paul and his team for how they’ve lined up his career. It has been absolutely flawless. Next up could be Tommy Fury, an actual pro boxer — like all the critics have asked for. Paul has said he wants to one day fight Alvarez. That might never happen and odds are that Paul never becomes an elite-level boxer. He doesn’t need to. He’s already making a bundle of money and starting to shape his own imprint on boxing, including working with women’s boxing stars like Amanda Serrano.

Paul is a young, solid athlete who has the financial resources to get the best training, nutrition and strength and conditioning. I think he’ll be competing in big fights after Silva hangs up the gloves in his second sport.

Which is the more must-see rematch: Lopez vs. Lomachenko or Naoya Inoue vs. Nonito Donaire?

Teofimo Lopez says he wants to move up to fight at 140 pounds instead of fighting in the lightweight division.

Parkinson: Both of these fights would do good pay-per-view numbers, but Lopez versus Lomachenko the second time around would be the bigger fight, and carries with it more intrigue. Can Lopez repeat the brilliantly controlled display he produced in October last year when he ran out a unanimous points winner? Or was their last fight decided partly because Lomachenko had a spectacularly off night, and was nowhere near to his usual standards?

Lomachenko’s career would be on the line in a rematch with Lopez, and if a fighter as smart as him fails to improve and make the adjustments to at least make it closer this time, it may be one defeat too many for the Ukrainian. At 33, after losing to Lopez once for all three titles and after an extensive amateur career, the three-weight world champion might consider retirement if he’s beaten again.

Inoue is one of the most exciting fighters active today, and it was a surprise to many that Donaire made their 2019 scrap so competitive. But, at 38, Donaire probably doesn’t have enough left to make it so close again against the world bantamweight king who is in imperious form.

Lomachenko, a breathtaking technician, will have to take risks against the bigger Lopez, which makes it a must-watch — if it happens.

Who won the press conference: Alvarez or Plant?

Canelo Alvarez says Caleb Plant spoke badly about his mother, prompting him to shove Plant at their news conference.

Rothstein: Neither. The whole thing was kind of ridiculous, especially since, had the cut under Plant’s right eye been worse (luckily it was minor), it could have been problematic for his training for the fight itself.

The scuffle got people talking for a day or two and might look nice on the promotional video but that’s about it. A lot of pre-fight brouhahas are all about gamesmanship and trying to sell tickets and both fighters, according to ESPN’s Raimondi, are referencing the insecurity of the other. That’s not super original.

That moment didn’t really enhance anything for either fighter, so all of it just seemed kind of “meh” once we got away from the immediacy of it.