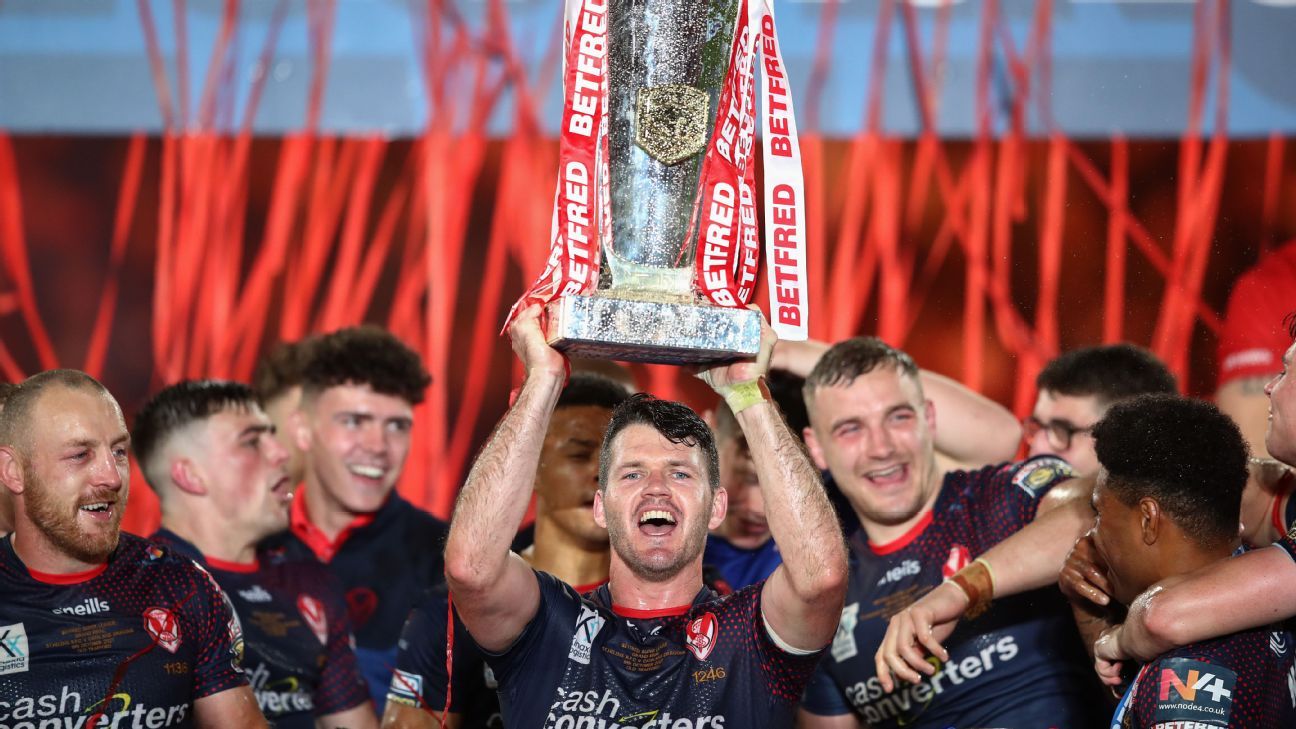 Former Wests Tigers star Naiqama was player of the match on Saturday after he scored the Saints’ two tries in their gripping 12-10 triumph at Old Trafford.

Australian fullback Coote, a cult figure at St Helens who like Naiqama will now be leaving the club, was a rock in defence and contributed two goals as he also made it a hat-trick of titles.

It was also a landmark night for Kristian Woolf, Saints’ Australian coach who has led them to the ‘threepeat’ – the first time the feat’s been achieved since the Leeds Rhinos in 2007, 2008 and 2009.

It was an emotional night for Fiji captain Naiqama, who’s heading back to Australia after three years in Britain.

He’s admitted that difficulties caused by the COVID-19 pandemic and, in particular, having to witness the birth of his first child on FaceTime had been a key part of his decision to return home.

The 32-year-old made all the difference in a rugged dogfight of a grand final, striking crucially in each half in front of 45,177 fans in the ‘Theatre of Dreams’.

Saints had to overcome adversity following the first-ever grand final sin-binning of winger Tom Makinson, and Catalans’ Mike McMeeken did touch down in the second half after superb kicking by Australian Josh Drinkwater to help push the French side 10-6 ahead.

Yet centre Naiqama, who had scored a striking solo effort in the 12th minute, clinched victory with the decisive poacher’s strike, latching on to Jonny Lomax’s grubber on 65 minutes and ploughing over while also taking a blow to the head.

“I was in so much pain from getting a knee in the back of the head – it’s a bit swollen but it’ll be alright,” Naiqama smiled.

Coote, who’s joining Hull KR in the Super League next season, kicked the conversion to complete the scoring.

Naiqama received the Harry Sunderland Trophy as player of the match from a previous winner Rob Burrow, who’s battling motor neurone disease. “Thank you for everything you’ve done in the game. You’re a true legend of the game,” Naiqama told the former Leeds hero.

For Australia’s Catalans’ hero Jimmy Maloney, though, it was an anti-climactic ending to his distinguished top-level career.

The 35-year-old, who’s won and lost NRL grand finals, kicked three goals to become the oldest scorer ever in a Super League final but was left sighing: “It doesn’t matter how old you are – defeats in grand finals still hurt as much.”

His Perpignan-based team had been dreaming of becoming the first French side to lift the biggest prize in European rugby league and 1,000 Catalans fans had travelled over – but, inevitably, they were completely outnumbered by Saints’ supporters.

Not even a message of support from soccer legend Eric Cantona could help the Dragons as Woolf’s side completed their league and Challenge Cup double following their Wembley victory in July.