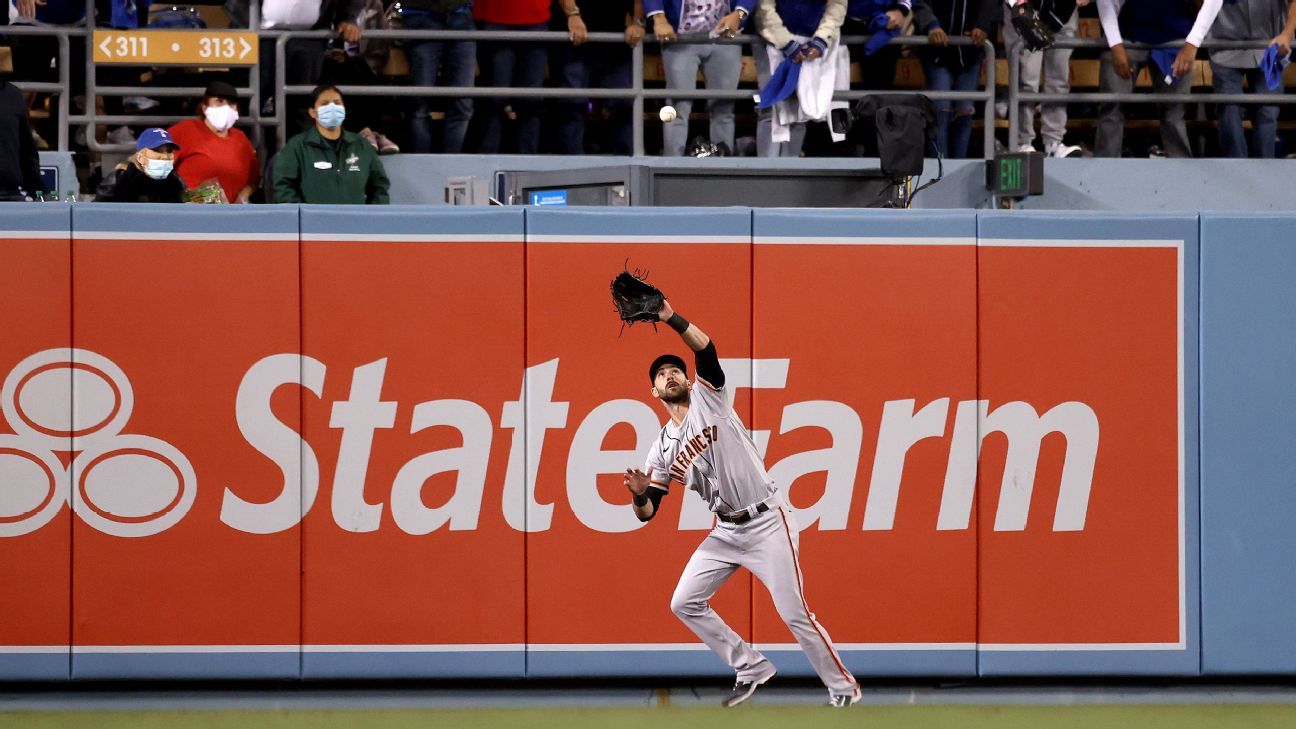 LOS ANGELES — Off the bat, nine innings into a game surprisingly devoid of action, it seemed as if an entire ballpark believed Gavin Lux had tied the score with his Los Angeles Dodgers down to their final out.

With none on, two outs and the Dodgers trailing by a run, Lux unleashed his best swing on an up-and-away, 99 mph fastball from the young, electric Camilo Doval and produced a 107 mph line drive with a 22-degree launch angle — a batted ball with an expected batting average of .890, the type that resulted in a home run about half the time this season.

But wind gusts that hovered around 15 mph for the most of this Monday night knocked the baseball down as it traveled into the deeper parts of Dodger Stadium’s center field. The Giants held on by a 1-0 score and took a 2-1 lead in this best-of-five National League Division Series, pushing one of the most talented teams in Dodgers history to the brink of elimination.

Dodgers manager Dave Roberts referenced Lux’s drive and another from Chris Taylor in the sixth — 372 feet, 107 mph — as the type that would have resulted in home runs “any other night.”

“Those two balls right there — it would’ve been a different outcome,” Roberts said. “But those were the elements both teams had to play with, and that’s baseball.”

Strong winds, whipping around the outfield, began about an hour before the first pitch, blowing so hard that both foul poles swayed throughout the night. Max Scherzer, who ultimately struck out 10 batters in seven innings of one-run ball, noticeably lost his balance midway through facing leadoff hitter Tommy La Stella and later said the wind was “pushing me towards home plate.”

Longoria couldn’t recall ever stepping out of the batter’s box so often, out of fear that he might get knocked over. His decisive solo homer to lead off the fifth — on an 0-2, 96 mph fastball that caught too much of the strike zone — became the only extra-base hit of the night, even though it registered as one of 13 batted balls that traveled at least 100 mph.

“I was thinking — if that ball didn’t go out tonight,” Longoria said, “I might just cash it in.”

Instead, Longoria, four days removed from his 36th birthday, produced the run that put the 107-win Giants one victory away from eliminating the 106-win Dodgers and advancing into the NL Championship Series. In hopes of doing so, the Giants will begin Game 4 with Anthony DeSclafani, who allowed 22 runs in 27 innings against the Dodgers this season. Roberts said his team remained undecided but stated repeatedly that “everything’s on the table,” including, one would assume, starting Walker Buehler on three days’ rest.

The Dodgers produced nine of the 13 100-plus mph batted balls in Game 3, and seven of them resulted in outs. Two of those came off the bat of Mookie Betts, one of which was a scorching line drive with two outs and the tying run on base in the seventh inning — another out thanks to a leaping catch by Crawford, a significantly more mobile shortstop in his age-34 season.

Crawford, a central figure for the Giants over the past 10 years, was playing in his 79th game at Dodger Stadium and couldn’t recall conditions like these in any other game.

“I hardly even remember a light breeze here most nights,” Crawford said. “The wind was definitely pretty crazy tonight, and it was a factor in the game for sure.”

The Giants received 14 outs from Alex Wood, a clubhouse favorite for the Dodgers who helped them win last year’s World Series, then got another five outs from Tyler Rogers. After Jake McGee escaped trouble in the seventh, Kapler turned to Doval, the 24-year-old right-hander who hasn’t allowed a run since coming back up from the minor leagues near the middle of August.

Doval breezed through the first five hitters. Then came Lux, pinch-hitting in the pitchers’ spot. He got a second straight fastball with the count at 1-0, drove it to center and stretched his left arm in the direction of the Dodgers’ dugout in anticipation of a celebration. Steven Duggar raced to the warning track, momentarily lost his footing as he began to make a sudden move forward, then secured the catch on the edge of the dirt.

Lux stood near first base with his mouth ajar, unable to believe the baseball had stayed in the park.

“I couldn’t believe it didn’t go,” Longoria said. “Guess it was just our night.”