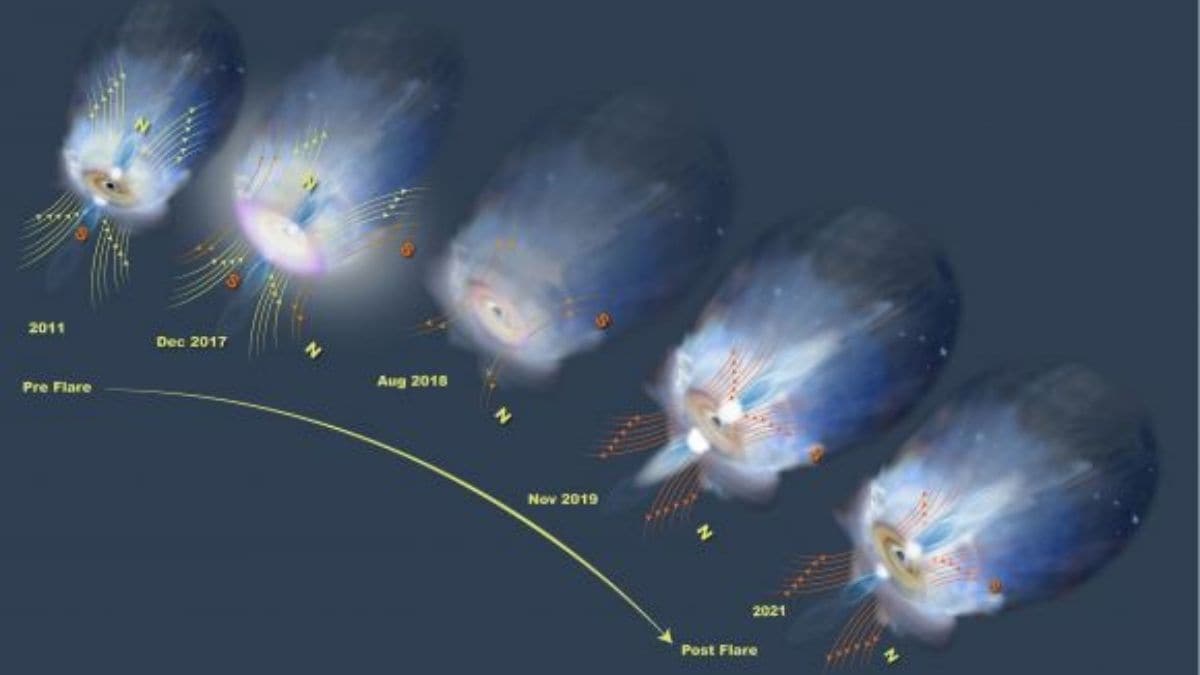 The intrigue around black holes is something that fascinates every space enthusiast. The physics behind it has troubled scientists for decades. These mysterious space elements are known as powerful cosmic engines because they provide the energy for quasars and active galactic nuclei. We may be discussing the magnetic field of black holes, but black holes don’t have a magnetic field of their own. The dense plasma that surrounds the black hole as an accretion disk is what results in a magnetic field around these black holes. When observing galaxy 1ES 1927+654, which is situated 239 million light-years away, scientists observed an abrupt change in the brightness around the galaxy’s massive black hole.

This has been attributed to the sudden change in the black hole’s magnetic field. While stars are known for magnetic reversal, that’s not believed to be the case with black holes. Our Sun reverses its magnetic field every 11 years. But a black hole is supposed to be more stable in this regard.

A black hole’s plasma swirls and the charged particles in it generate electrical current along with a magnetic field. The direction of the plasma flow does not change spontaneously. Hence, a black hole’s magnetic field is believed to be quite stable. But this latest observation about the magnetic reversal of a black hole has baffled scientists.

A report in Science Alert stated that scientists observed this galaxy in 2018 through an automated sky survey. Scientists observed that the galaxy had brightened 100 times in visible light. The Swift Observatory captured its glow in X-rays and ultraviolet to look beyond visible light range. Data from archival observations showed that the galaxy had started to brighten towards the end of 2017.

Initially, scientists believed that the increased brightness was caused by a star passing by the galaxy’s black hole. But this event would have caused a disruption that would rip the star apart. As this was not the case, scientists continued with their research of the galactic flare.

After studying the changes in the full spectrum of light, scientists discovered an abrupt drop in X-rays. X-rays are the result of spiralling charged particles within an intense magnetic field. This change in X-rays pointed to a sudden change in the magnetic field.

The researchers suggest that as a black hole accretion disk undergoes a magnetic reversal, the magnetic field weakens at the outer edges of the disk. After the reversal is complete, the disk returns to its original state.