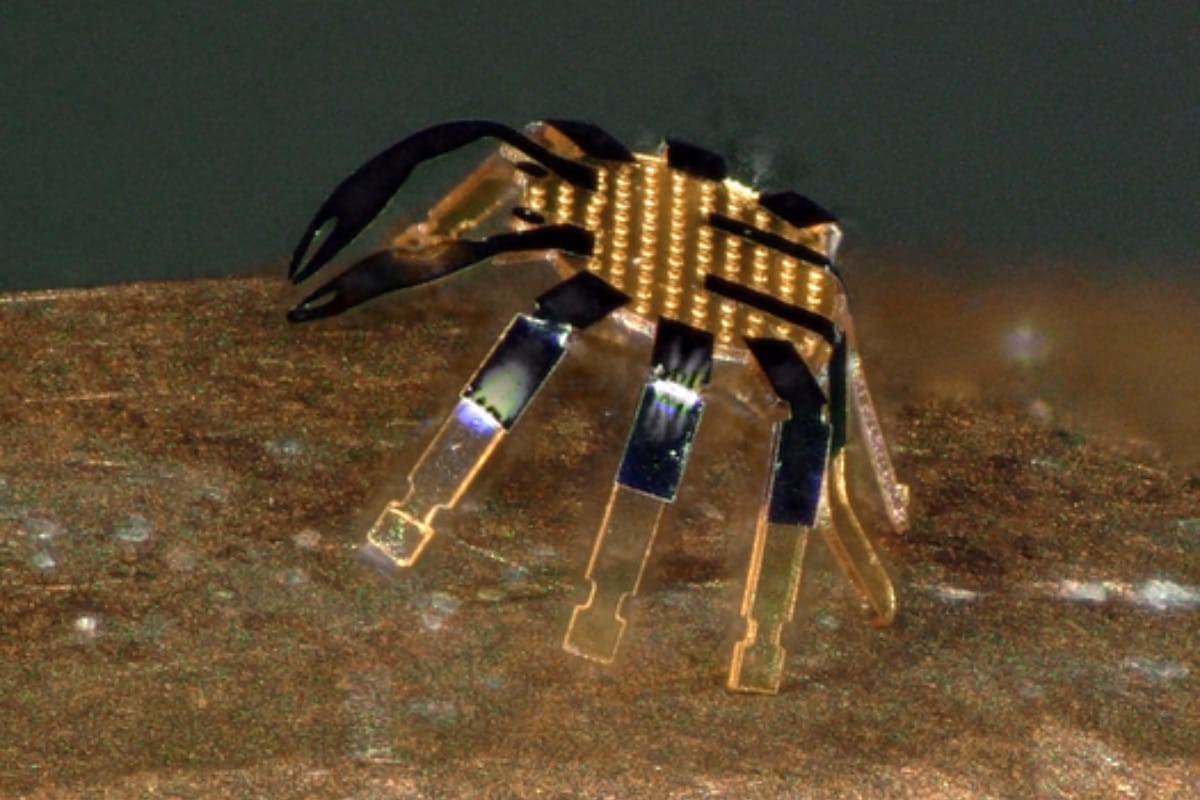 The smallest-ever remote-controlled walking robot has been built by Northwestern University engineers, and it comes in the guise of a tiny, charming peekytoe crab. These tiny crabs, which are only a half-millimetre long, can bend, twist, crawl, walk, turn, and even jump. The researchers also created millimetre-sized robots that resemble inchworms, crickets, and beetles. Though the research is still in its early stages, the researchers hope their technology will help them get closer to developing micro-sized robots that can do practical jobs in constrained locations.

The crab, which is about the size of a flea, is not propelled by complicated machinery, hydraulics, or electricity. Instead, its strength comes from the body’s elasticity and resilience.

To build the robot, the researchers employed a shape-memory alloy material that converts to its recalled shape when heated. The team utilised a scanning laser beam to quickly heat the robot at various specific spots across its body in this case. When cooled, a thin layer of glass returns the deformed component of the structure to its original shape.

The findings of the study were published in the journal Science Robotics.

John A Rogers, who led the experimental work, was quoted as saying, “Robotics is an exciting field of research, and the development of microscale robots is a fun topic for academic exploration. You might imagine micro-robots as agents to repair or assemble small structures or machines in industry or as surgical assistants to clear clogged arteries, to stop internal bleeding or to eliminate cancerous tumors — all in minimally invasive procedures.”

“Our technology enables a variety of controlled motion modalities and can walk with an average speed of half its body length per second. This is very challenging to achieve at such small scales for terrestrial robots,” added Yonggang Huang, who led the theoretical work.

Locomotion is created as the robot transitions from one phase to the next: from distorted to recalled shape and back again. The laser not only activates the robot remotely, but the laser scanning direction also determines its walking direction.

To begin with, the team created flat, planar antecedents to the walking crab constructs. The precursors were then attached to a somewhat stretched rubber substrate. A controlled buckling process happens when the stretched substrate is loosened, causing the crab to pop up into precisely specified three-dimensional formations.

The Northwestern team could create robots of all shapes and sizes using this manufacturing approach.

Six of the best bits you might have missed at Glastonbury
Recruiters say the tech job market is still red-hot, despite isolated layoffs and cautious words from execs
Tech leaders react to Roe v. Wade reversal
Every new passenger car sold in the world will be electric by 2040, says Exxon Mobil CEO Darren Woods
Daughter of Russian opposition leader Alexey Navalny speaks out