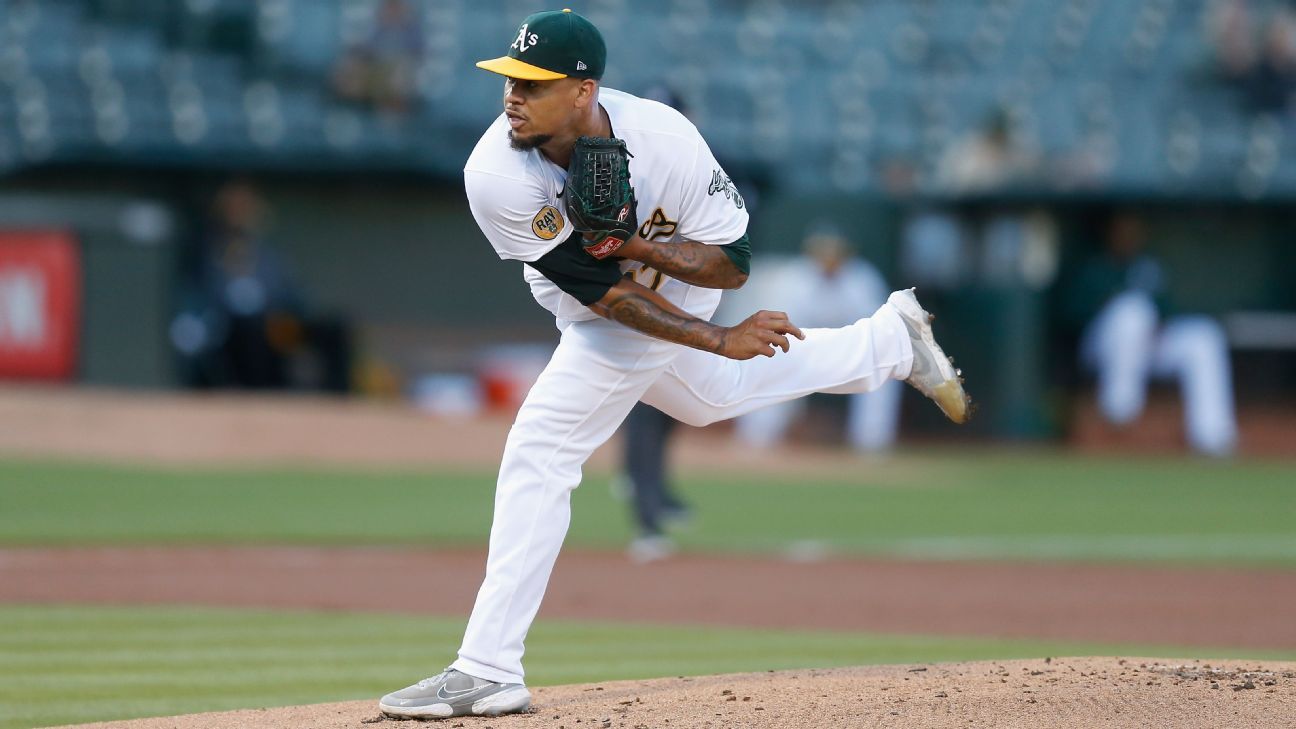 The New York Yankees have acquired right-handed starter Frankie Montas and closer Lou Trivino in a deal with the Oakland Athletics, the Yankees announced Monday.

The A’s are receiving left-handers Ken Waldichuk and J.P. Sears, right-hander Luis Medina and second baseman Cooper Bowman from the Yankees. Waldichuk, 24, was the fifth-highest-ranked prospect in the Yankees’ farm system, according to MLB.com.

The American League-best Yankees have had a busy deadline, acquiring outfielder Andrew Benintendi and rookie reliever Scott Effross before solidifying an already strong rotation and bullpen with the acquisitions of Montas and Trivino.

The trade for Montas is the second involving a highly sought-after starting pitcher this week, following Seattle’s acquisition of right-hander Luis Castillo from the Cincinnati Reds for a four-prospect package.

Montas, a 29-year-old who is not eligible for free agency until after the 2023 season, has shown flashes of excellence since signing with Boston in 2009. He was traded to the Chicago White Sox and Los Angeles Dodgers before moving to Oakland, where he blossomed over the past six seasons into the pitcher who this season has 104⅔ innings of 3.18 ERA ball with 109 strikeouts, 28 walks and a dozen home runs allowed.

“His level of talent, especially with how he’s pitched the last couple years, just excited to get him in the mix,” Yankees manager Aaron Boone said. “He’s got the full arsenal and stuff you look for top of the rotation guy. Gone out and proved last couple years he is that kind of caliber pitcher.”

A shoulder injury sidelined Montas for a mid-July start, but he returned with three shutout innings, followed by a five-inning, two-earned-run start against Houston. That was enough of a sample to draw a broad range of teams — large-market and small.

”I think we’re comfortable with where he’s at shoulder-wise,” Boone said.

Going into Monday night’s series opener against Seattle, Domingo German had an 8.22 ERA in his first two starts after recovering from a right shoulder impingement.

By winning the Montas sweepstakes, the Yankees add a starter who will slot into a playoff rotation with a fastball-slider-splitter pitch mix that has proved effective all season. Montas went at least five innings in 15 of his first 16 starts, with the only exception being a game in which he got hit in the hand on a comebacker and left the game after 1⅔ innings.

“Little bit down year statistically but we don’t think it lines up with what we’re seeing on some underlying things and who we think he is,” Boone said. “He’s been a very good reliever for them on some playoff-caliber teams.”

Trivino joins one of the better bullpens in the majors, but one that has struggled with injuries of late. Chad Green, Michael King and Zack Britton are all on the 60-day injured list with Green and King expected to miss the rest of the season.

Waldichuk, who is pitching at Triple-A Scranton/Wilkes-Barre, is 6-3 with a 2.71 ERA overall in 17 starts for two clubs in the Yankees’ minor league system this season and has 116 strikeouts in 76⅓ innings.

Bowman, 22, is hitting .217 with eight home runs and 35 RBIs for Class-A Hudson Valley this season.

The Associated Press contributed to this report.