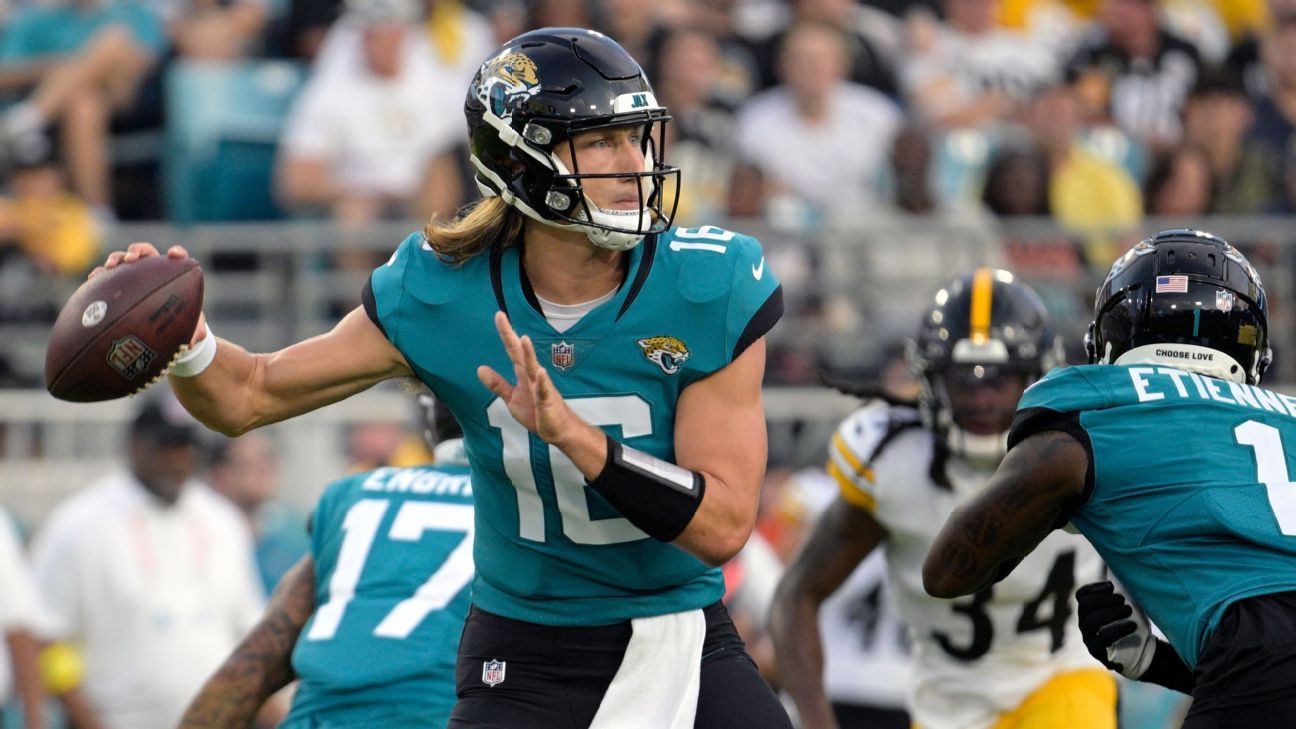 JACKSONVILLE, Fla. — It was just a quick movement. If you weren’t watching Jacksonville Jaguars quarterback Trevor Lawrence at that precise moment, you missed it.

But the one-second Dikembe Mutombo-like finger wag that Lawrence aimed at Pittsburgh Steelers defensive back Cameron Sutton after he dropped a throw over a leaping Sutton’s fingertips into Marvin Jones Jr.’s hands for a completion in a preseason game was pretty significant.

It meant: “No, no, no.” Lawrence said after the game that he was just having fun because he grew up a Tennessee fan and Sutton played for the Vols. But maybe that finger wag also means a whole lot more.

The Jaguars have no chance of emerging from their accustomed spot in the NFL’s cellar if that doesn’t happen. Since Lawrence’s rookie season was a mess — partially for reasons out of his control — he enters 2022 with the same question surrounding him as he did last September:

Will he become the NFL’s next great young quarterback?

Lawrence threw 12 touchdown passes and had 22 turnovers (17 interceptions) and a 3-14 record in 2021. It was the opposite of everything he experienced on a football field the previous seven years. He threw 17 interceptions in three seasons at Clemson and had only four losses as a starting quarterback at Clemson and Cartersville (Georgia) High School combined.

Some of it was Lawrence’s fault, but it’s hard to argue that former Jauars coach Urban Meyer’s questionable football decisions and the dysfunctional environment he created and fostered inside the building weren’t the most significant factors. The issues became apparent pretty quickly.

Meyer had Lawrence — the No. 1 overall pick and the player ESPN draft expert Mel Kiper Jr. ranked as the best quarterback prospect since Andrew Luck in 2012 — rotating days with the first-team offense with Gardner Minshew throughout camp. He declared it an open competition, and it wasn’t until Aug. 25, 2021, that Meyer named Lawrence the starter — four days before the final preseason game.

Things got worse … and embarrassingly so, from Meyer’s “inexcusable” actions at an Ohio bar to his inexplicable benching of the team’s best player to the verbal assault of his staff and an alleged assault of his own player.

“I wouldn’t believe you if you told me this is how this year was going to go,” Lawrence said after the Jaguars fired Meyer on Dec. 16.

The 2021 season was so disjointed that the picture of Lawrence’s future is still just as fuzzy as it was a year ago.

“Any questions that anyone had going into last season, I don’t know that many of those were answered,” said ESPN Monday Night Football analyst and Hall of Fame quarterback Troy Aikman.

Aikman can certainly relate. He was the No. 1 pick in 1989, threw nine touchdown passes and 18 interceptions and went 0-11 as a starter with the Dallas Cowboys as a rookie. Aikman was Jimmie Johnson’s first draft pick and the cornerstone of the franchise’s rebuild, but it took two more seasons before Aikman would throw more touchdown passes than interceptions and lead the Cowboys to a winning record.

They won the Super Bowl in his fourth season, but that first year was bad.

“Everybody ultimately comes back to point their fingers at the quarterback.”

Lawrence and the Jaguars are in the same spot. His turnovers were a problem, but he also had issues with his accuracy. He completed 59.6% of his passes, well below the league average of 65.5%. Only two quarterbacks had a worse completion percentage than Lawrence last season — fellow rookies Justin Fields (58.9) and Zach Wilson (55.6).

Lawrence was hurt by a league-high 39 drops, but even if all those passes had been caught, Lawrence’s completion percentage would have been 66.1% — barely above the league average. He enters the season with concerns about his decision-making and accuracy.

“He’s got to become more accurate on throws he literally should make every time he drops back,” NFL Network analyst Brian Baldinger said. “He threw a deep post to Christian Kirk the other day, overthrew him, but he had Evan Engram on the cross. You could take the post; it’s a lower-percentage throw. Engram is a much better throw, easier throw, and it would’ve been probably an easier completion.

“He’s got everything there [talent-wise]. I think he just has to work on those two things right now.”

Adding veteran receivers such as Kirk and Zay Jones and a veteran tight end in Engram should help Lawrence improve his decision-making and accuracy.

Playing for head coach Doug Pederson should also be a boost. The positive culture alone has helped Lawrence, but he also has embraced Pederson’s offense — which shaped Carson Wentz into an NFL MVP candidate. 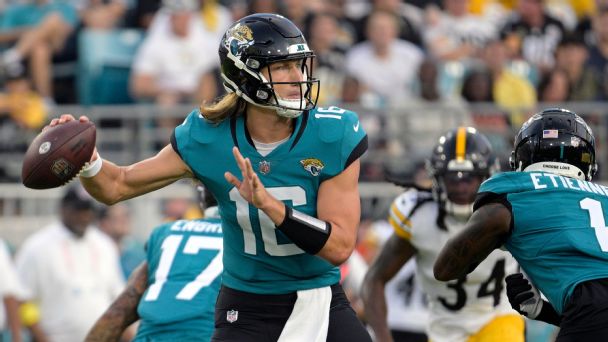 Lawrence’s teammates say he is more comfortable on the field, making quicker decisions, and throwing the ball more confidently than he did as a rookie.

“He’s seeing things a lot faster and being able to pick up guys being open a lot faster and where the ball needs to go given [the] coverage,” tight end Dan Arnold said. “He just feels more loose back there, like way more like, ‘I’m going to put the ball in the spot and know my receiver is going to get there and, and know that’s the right place to put it.’

“Even outside of the quarterback position, if you have an NFL guy that’s thinking too much and not playing loose, you watch it on film and you can see it clear as day. When he is playing loose, he’s on it.”

Running back Travis Etienne Jr. played with Lawrence at Clemson for three years, so he has more background with Lawrence than anyone on the Jaguars’ roster. Etienne saw a difference in his quarterback when they first got back on the field together in the spring.

“He has to believe in himself,” Etienne said. “He had to have that. He’s always been a very humble guy, but he had to find a way to be cocky. In this league you have to be cocky. Not cocky — like just confidence. You have to be confident in stuff. I feel like he knows that now and that’s what he’s been working on. And you can see in the way that he’s been playing.”

Pederson didn’t watch much of Lawrence while he was taking a year off from football in 2021, but he did watch a lot of tape after getting hired in February and believes Lawrence has evolved.

“He looks sharp. He looks crisp,” Pederson said. “Gosh, he sees the field really well right now. He’s commanding the offense. He’s still in the growth mentality, which is exciting. He still wants to get better each and every day. We’ve seen that out of him. He’s leading not only by example but being able to go up to players and talk to them about routes or protections with the O-line or whatever it may be.

There was one major positive for Lawrence as a rookie. Things deteriorated to the point where the 22-year-old Lawrence believed he had to stand up in front of the media and call for an end to the dysfunction and distractions. Meyer’s follies forced him to emerge as the team’s unquestioned leader and face of the franchise.

“It’s a lot to put on a first-year, first-time rookie quarterback,” Pederson said. “There’s a lot that goes into it. You’re representing the organization, you’re leading the football team, you’re standing in front of the media every day and every week. It’s tough, and then to go through what he went through and how he kind of came through it and stood tall and really took a lot of bullets and really did a great job of handling all that, I think that’s just going to make him that much more special as we go.

“The fact that he’s been able to handle that early on in his career, you don’t see that very often in the league.”

Baldinger said the way Lawrence handled himself last season further proves to him that Lawrence is going to be a franchise quarterback.

Ready for kickoff? Sign up now to play with friends and family. Get started >>

“He got put into it probably a lot earlier than he wanted to or needed to, but you know, he’s, he’s going to be better for it down the road.”

Lawrence says he’s more comfortable and confident on the field, picked up Pederson’s offense at a quicker rate than he did Darrell Bevell’s offense as a rookie, and said he is throwing the ball better than ever. He didn’t have to recover from surgery to his left (non-throwing) shoulder or prepare for the draft this offseason, and that allowed him to work on his mechanics and get stronger.

And while his rookie season was challenging, he knows he can’t just flush 2021.

“It’s important to just kind of learn from last year and always not necessarily think about that all the time, you don’t want to think about the bad things, but you want to use what you learned and not make the same mistakes especially as individuals, as players,” Lawrence said. “Things that went right, went wrong; we all have things we can get better at.

“For me, I learned so much I wouldn’t say it’s like starting over because I’m thankful for those things I learned. I don’t want to start over.”

The funny thing about that finger wag is Lawrence’s teammates didn’t see it. They saw the throw and watched Jones make the catch, but it wasn’t until after the game and the footage ended up on social media that they reacted.

And they loved it.

“You have to have that swagger as quarterback,” Etienne said.

Arnold said he’d seen the swagger from Lawrence one other time: After the quarterback one-handed a high snap, tipped it to himself, rolled right to avoiding a blitzing safety and found Marvin Jones Jr. in the back of the end zone for a touchdown in the Jaguars’ 26-11 victory over the Indianapolis Colts in the 2021 finale.

Maybe that version of Trevor Lawrence is here for good. If that’s the case, Arnold said, Lawrence and the Jaguars are going to take off.

“You want a gunslinger back there that’s going to be like, ‘I’m going to put this ball where it needs to go and I’m going to give it to you and you’re going to take it to the house,” Arnold said.

“That type thing you love having in a quarterback. You just see it in his eyes.”