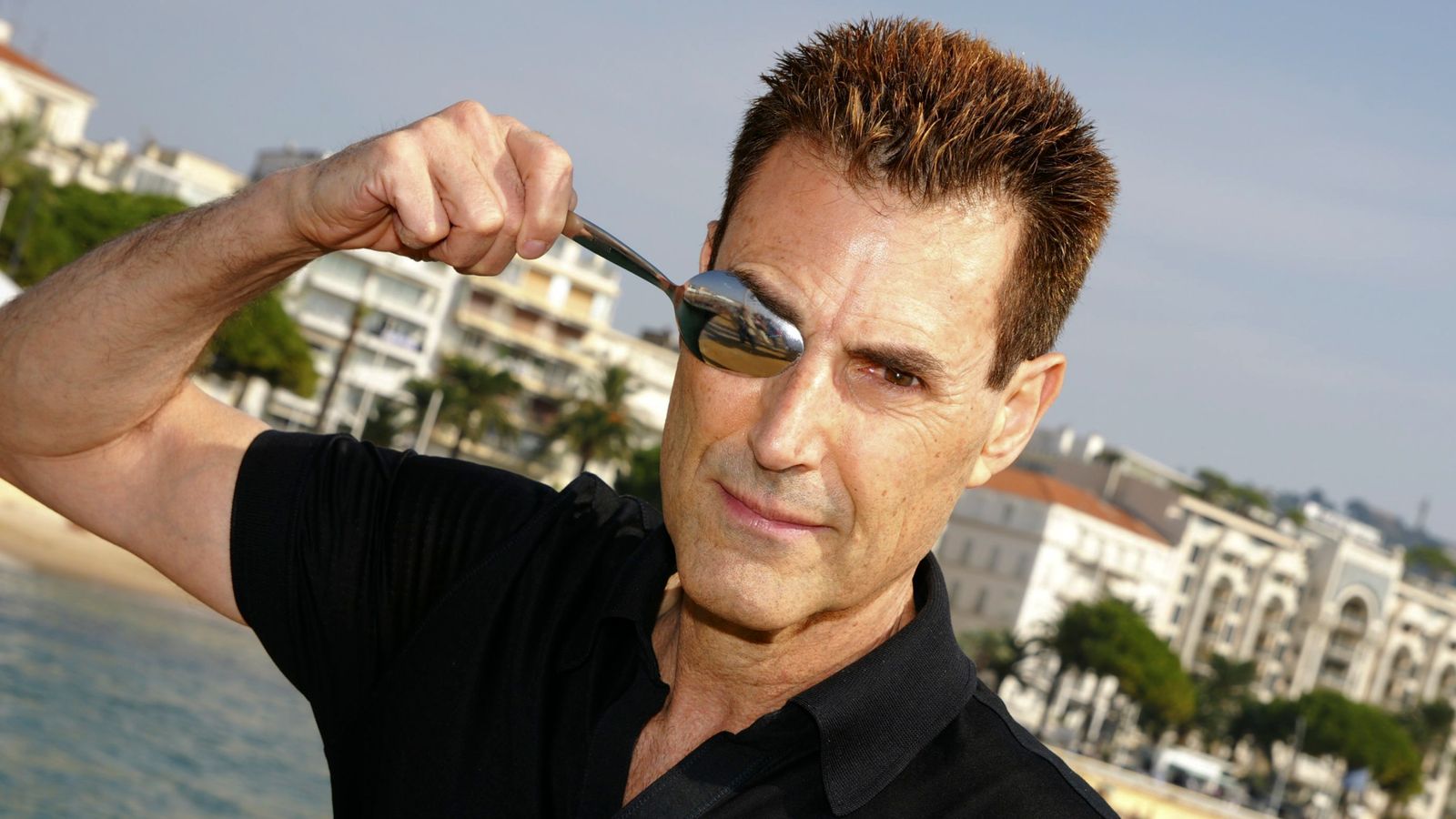 It’s not every day Uri Geller shows you a mysterious alien object given to him by John Lennon, reads you CIA certification of his paranormal abilities or invites you to become a citizen of his micronation.

But after chatting to the 75-year-old Israeli-born illusionist for just a few minutes, it’s easy to see how an encounter with the star is likely to venture into the realms of the unexpected.

Geller, who chats to me via Zoom in his “museum” (which contains among other things Salvador Dali’s crystal ball, Mick Jagger’s guitar and Muhammad Ali’s boxing gloves) is here to talk about one of his favourite subjects – the paranormal.

And if encounters of the third kind weren’t enough, he also has a colourful story about his friend and former Beatle, John Lennon.

Framed in a glass case on the wall, along with a pair of the late Liverpudlian’s glasses, some of the pop star’s hair and a sketch of a UFO he says Lennon drew after witnessing an alien craft, he has what looks like a small, golden egg which he says is an extra-terrestrial rock the star gave him.

An animated Geller tells Sky News: “[Lennon] lived in The Dakota building and I lived on 52nd Street… He called me up one day, kind of in a panic, saying ‘Uri, Uri Please come. You’ve got to meet me. Something happened to me.’ And I said, ‘John, it’s 3:00 in the morning’. He replied: ‘No, no, no. You’ve got to come’.

Geller goes on: “So I met him at the hotel, and he was white and shaking. And I said, ‘John, what happened?’ And he put his left hand into his pocket, and he pulls out this item here [pointing at the egg]. And I said, ‘What is this?’ And he handed it to me and it’s really heavy.

“And then he tells me that while he was lying in his bed, suddenly a strobing spear of light appeared and an extra-terrestrial hand kind of stretched out and gives him this object.”

Geller admits, “You know, my first question was, ‘What did you smoke?’ But he swore to me that this actually happened. And I totally believe him.”

Geller says it was Lennon who asked him to keep hold of the unexplained object, adding: “It’s not a rock. Nobody knows what it’s made out of. I get thousands of e-mails from around the world asking me one question. ‘Uri. Why don’t you give this to a scientist, and they will finally tell you what it’s made out of?’ And I say, ‘No way’. You know why? Because I don’t want to be disappointed that this is made in China. I want to believe John Lennon’s words.”

It’s a story Geller is practised in telling, and one he discusses during his appearance on Nub TV – a new show that promises a mash up of new music, UFOs and the paranormal.

It’s quite the mix, but one the show’s presenter Mark Christopher Lee says he’s been eager to do for a while.

A musician, as well as a lover of the unexplained, Lee tells Sky News: “We’ve got new music videos and great new bands coming out. We’ve also got interviews with my favourite paranormal and UFO celebrities. We did a wish list of who we wanted to interview and we got them all.”

Suffice to say, Geller was top of the list. And it turns out the pair are connected away from the show too.

He’s referring to the national anthem of his very own micronation – Lamb Island. Geller bought the rocky outcrop off the east coast of Scotland in the Firth of Forth in 2009.

And as well as its own anthem, the island now also has its own flag, constitution and football team (the Lambies). And this is the best bit – everyone can become a citizen.

Geller explains: “It costs $1 (87p) and the money goes to a charity called Save A Child’s Heart. They have already saved 6000 children with open heart surgery… Stephen Fry is a citizen. Peter Andre is a citizen. And Tom Cruise and Brad Pitt could be the next to become citizens of my island.”

Starting up his own country seems a world away from his beginnings as a magician and self-proclaimed psychic. But Geller says it is his extrasensory perception (ESP) that made him what he is today.

He proudly displays an official CIA document on the museum wall, given to him after the intelligence agency conducted a week of rigorous testing of his powers back in 1973.

He says: “This is an endorsement that I got from the Central Intelligence Agency, the CIA, and this is what it says: ‘As a result of Geller’s success in this experimental period, we consider that he has demonstrated his paranormal perception ability in a convincing and unambiguous manner. CIA’. So, I’ve been there. I’ve done it. I know what I’m talking about.”

Nub TV host Lee chips in to says the subject of UFOs has passed from the realms of conspiracy theory into the mainstream: “With the advent of smartphones, anyone who sees something strange in the sky, can get the phone out and just film it.”

Geller agrees: “UFOs are not a joke anymore. I mean, just Google it. You’ll see American fighter pilots screaming in their cockpits: ‘Oh, my God, what is that?’ And they actually film crafts that are travelling at such velocities, at such speeds, we don’t have such technology.

“Barack Obama admitted it, Donald Trump, they are out there. They’re watching us. I want to believe that they’re here.”

Geller goes on to describe a trip to NASA, where he says he first witnessed evidence of UFOs.

“I met Edgar Mitchell, who was the sixth man to walk on the moon, and he convinced me to leave Israel and be tested by the CIA. He took me to a secret base and introduced me to a German scientist who was previously in the Nazi regime – Doctor Wernher von Braun.”

Braun was a German-American space engineer – and member of the Nazi Party – who was a leading figure in rocket technology in Nazi Germany. He later worked for NASA, developing rocket and space technology in the US.

Geller continues: “It was Braun who showed me, in his private office in a safe, a piece of a UFO that crashed on our planet. And I said, ‘What?’ I mean, if Dr Braun, who took Americans to the moon, tells me that a UFO crashed on Earth, I have to believe [him].”

But Geller says this wasn’t the most surprising thing he saw on his visit, and things got even more top-secret.

He goes on: “Then Dr Braun takes me out to the parking lot. He says, ‘Sit next to me’. He tells his limo driver to drive deep into the base and we reach a concrete building. A guard lets us in. We go three floors down, and he gives me an Antarctica warm coat to put on. He puts one on too.

“He took me to a huge refrigerator room. And, I must stop here because there are certain things that I cannot talk about… But just use your imagination to understand what I’ve seen in that refrigerator room with my own very eyes. Aliens exist. Full stop.”

Known for his voracious spoon-bending in the 1970s, Geller has another trick up his sleeve – quite literally.

As the interview comes to an end, he offers to bend a spoon for Sky News. It’s clearly a party trick he’s been asked to perform so many times he’s come up with a novel solution.

A lifelike tattoo of a teaspoon on his right bicep allows him to bend it at will, providing fans, friends and journalists with the conveniently pleasing anecdote, “Uri Geller once bent a spoon for me…”

We may never know whether John Lennon’s golden egg was really delivered to him by aliens; what Geller actually saw in those freezers, or whether his CIA-approved psychic abilities are as real as he claims.

But one thing’s for sure – Geller the showman is alive and well, and his talent for spectacle is out of this world.

Uri Geller is the special guest on tonight’s episode of Nub TV, which airs on Sky TV Channel 186 (Ayozat) Thursdays at 9pm.

Toronto out and Detroit in? Teams most likely to rise and fall in the playoff race
Man charged with murder of Olivia Pratt-Korbel
Truss’s tax cut U-turn will embolden her many critics in the Tory party
Oil prices could soon return to $100 as OPEC+ considers ‘historic’ cut, analysts say
Electric vehicle tax credits and rebates available in the US, sorted by state