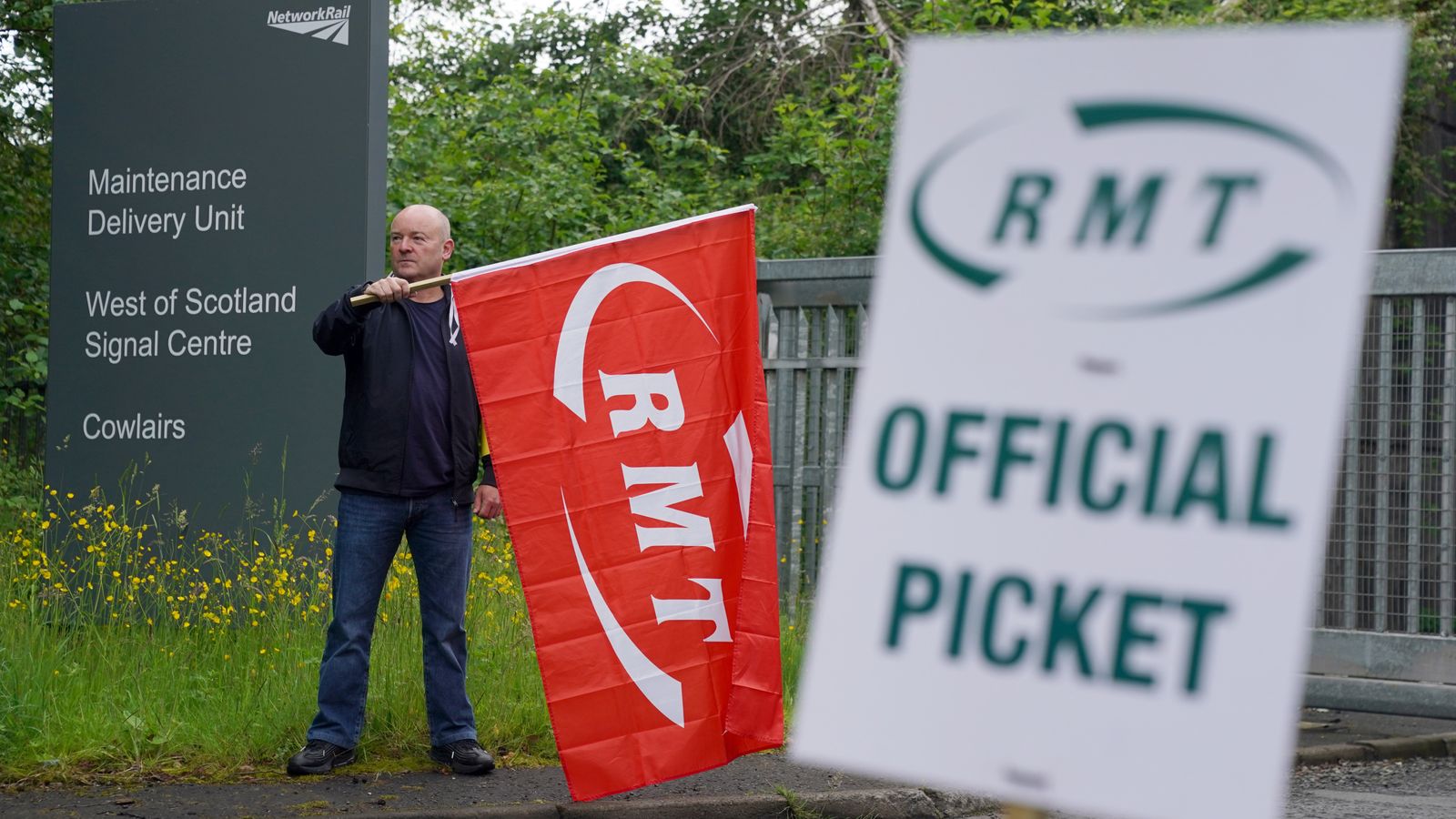 Rail workers’ union RMT has announced more strikes next month following what it said was a pay offer “U-turn” from Network Rail.

Three days of strike action are set to take place on 3, 5 and 7 November.

Negotiations had been under way between the union and the rail operator.

The Railway, Maritime and Transport (RMT) said there had been an agreement that Network Rail would commit to an improved offer on pay and work towards a negotiated settlement but the company “reneged on their promises of an improved pay offer and sought to impose job cuts, more unsocial hours and detrimental changes to rosters”.

The strikes are taking place as the rail company “attempted to impose drastic changes in working practices”.

The union said Network Rail wrote directly to staff to undermine talks and have tried to rehash a previously rejected deal.

RMT staff will also strike on 3 November in a separate dispute with London Underground and Overground networks (Arriva Rail London).

RMT General Secretary Mick Lynch said: “On the one hand they (Network Rail) were telling our negotiators that they were prepared to do a deal, while planning to torpedo negotiations by imposing unacceptable changes to our members’ terms and conditions.

“Our members are livid with these duplicitous tactics, and they will now respond in kind with sustained strike action.”

Reacting to the announcement, Network Rail’s chief negotiator, Tim Shoveller, said: “A two-year 8% deal, with discounted travel and a new extended job guarantee to January 2025, is on the table ready to be put to our staff.

“Unfortunately, the leadership of the RMT seem intent on more damaging strikes rather than giving their members a vote on our offer.

The company said it remains available for serious talks and to negotiate in good faith.

“Our sector has a £2bn hole in its budget with many fewer passengers using our services.

“That reality is not going to change anytime soon and a fair and affordable and improved deal is on the table, ready to be implemented if our people were only offered the opportunity.”

The latest announcement follows months of strike action from the union as they seek to halt redundancies and improve pay and conditions.

More than 45,000 workers took part in strikes which impacted the entire British rail system through knock on disruption.

Strikes began in June and proceeded until this month. Less than a fifth of trains ran on strike action days.

RMT is just one of numerous unions and organisations engaged in industrial action. Also within the rail industry, Aslef (Associated Society of Locomotive Engineers and Firemen) and the TSSA (The Transport Salaried Staffs Association) organised walkouts for thousands of members over the past months.

Speaking on Sophy Ridge on Sunday, Unite general secretary Sharon Graham said: “I think there could be up to a million people on strike very, very soon. We could see multiple strikes this winter.”

The Department for Transport described the latest RMT strike announcement as “incredibly disappointing”.

“Through no fault of their own, millions of people will once again have their day-to-day lives disrupted and be unable to attend work, school or vital doctor’s appointments,” a spokesperson said.

“Our railway is in desperate need of modernisation but all more strikes will do is take it back to the dark ages and push passengers further away.

“We urge union bosses to reconsider this divisive action and instead work with employers, not against them, to agree a new way forward.”

Elon Musk might need new Tesla-backed margin loans to support Twitter
Ukrainians fight Russian mercenaries and plummeting temperatures in the Battle for Bakhmut
UK ‘is already in a recession which is expected to last into next year’
‘It’s a dirty game’: Prince Harry says only he and Meghan know the ‘full truth’ in new trailer for docuseries
‘Cause for concern’: Millions can’t afford to heat their homes as ‘dangerously cold’ weather arrives