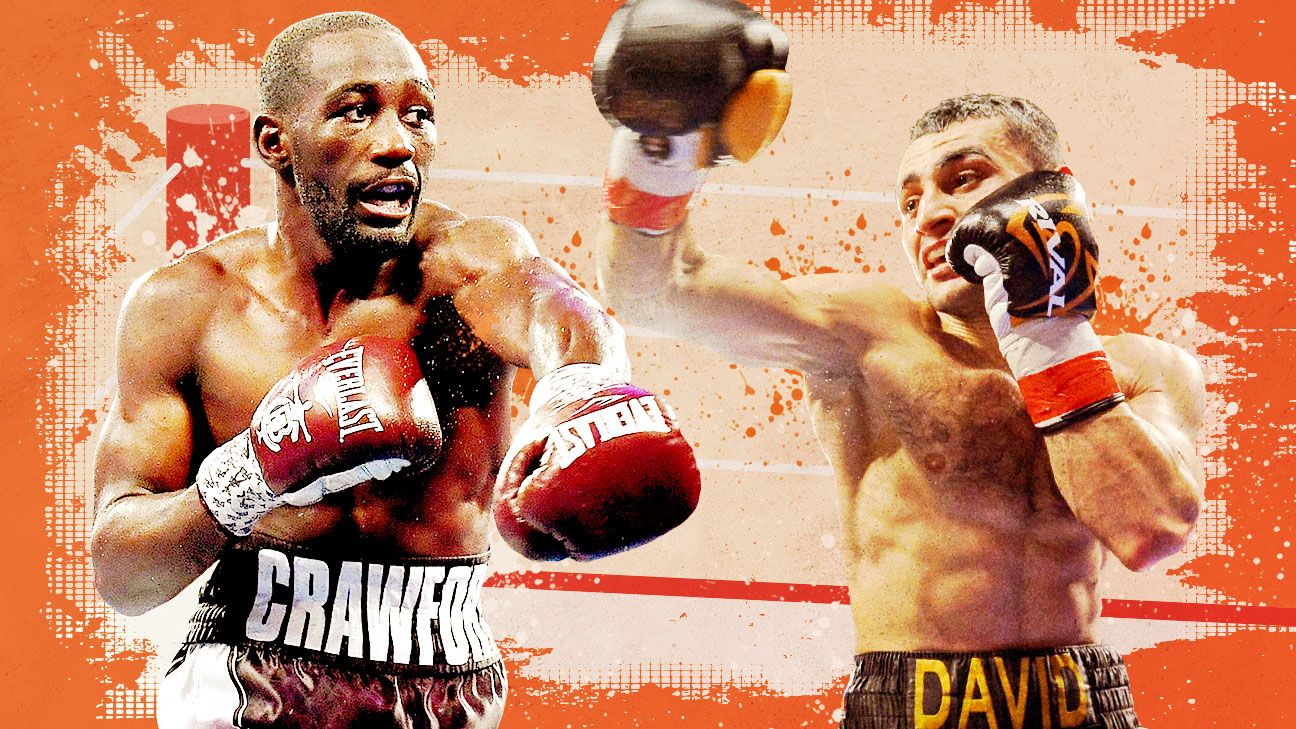 My No. 1 men’s pound-for-pound boxer, Terence Crawford, of Omaha, Nebraska, finally returns to the ring on Saturday, and while he’s not facing archrival Errol Spence Jr., Crawford will take on a top welterweight contender in David Avanesyan (BLK Prime PPV, 9 p.m. ET).

But to make things interesting, he’s going head-to-head on television against arguably one of boxing’s biggest characters and talents. Teofimo Lopez Jr., the Brooklyn native, will be fighting in New York’s Madison Square Garden on the same night on ESPN (9 p.m. ET, with undercard at 6 p.m. ET on ESPN+).

Top Rank Boxing is now on ESPN and ESPN+. Subscribe to ESPN+ to get exclusive boxing events, weigh-ins and more.

Lopez will face Spain’s Sandor Martin, who defeated future Hall of Famer Mikey Garcia in a big upset back in October 2021. Sandor is a big southpaw with 42 fights on his resume (40-2, 13 KOs).

These are two entirely different matchups on the same day at the same time. Two ultra-talented fighters in Crawford and Lopez, but with very different styles, against two possessive and dangerous challengers.

Here’s why you should watch both:

Crawford never seems to disappoint. He is precisely what today’s boxing and casual fans enjoy watching — a knockout specialist. In his last 10 fights, Crawford is 10-0 with nine consecutive knockouts. Crawford is the only man to stop former champion “Showtime” Shawn Porter. Porter is known for giving unified welterweight champ Spence all he could handle back in 2019. Porter lost that fight in a split decision, and many thought he won.

And while Crawford hasn’t been in the ring since he faced Porter more than a year ago, he’s a big favorite to win. Hopefully a victory in this bout will finally set up a fight for the undisputed welterweight championship in 2023 — but we’ve been saying this for years.

There’s a lot on the line for Crawford, and that alone is a reason to watch this fight. This may be the last time we get to assess Crawford’s performance before he faces Spence. Again, we’ve said this before. To add, Avanesyan is a big puncher who has 17 KOs out of his 29 wins and is on a six-fight KO streak. Furthermore, this will be Anvaneyan’s second and Crawford’s first bout this year. Will the inactivity of Crawford be an issue, and even the talent disparity in this matchup?

Avanesyan must get lucky early in the fight as Crawford tends to get in rhythm after 2 or 3 rounds. During that time, he’s vulnerable while he’s gauging distance and finding those moments to counter. However, Avanesyan’s style seems to be tailor-made for Crawford’s counterpunching style. Avanesyan fights well off his front foot, but he must be perfect to have a chance to beat Crawford.

I’ve seen innovative pressure momentarily throw off the champ’s game. And what I mean by innovative pressure is that Avanesyan likes to pressure, but he must learn how to change pace and rhythm continuously to avoid being timed by Crawford’s cat-like strikes. Crawford has a remarkable ability to adjust quickly on the fly, as he is multidimensional and has a great ring IQ.

Nevertheless, there is always a concern for any boxer who chooses to step into the ultimate truth-teller we call the ring. Crawford is not a spring chicken, as he turned 35 this year. Activity is essential for any prizefighter, and ring rust doesn’t care about rankings. This matchup is considered a tune-up for Crawford, but it’s somewhat of a World Cup final for Avanesyan.

Eliminating mistakes as often as possible is critical for Avanesyan as well as making Crawford uncomfortable by hitting him anywhere on his body. On the other hand, Crawford should look for the uppercut as Avanesyan charges inside.

Lopez is still repairing his once-damaged pride and the only blemish he has suffered in his career, a split-decision loss to George Kambosos a little over a year ago. Lopez, the former unified lightweight champion, will fight for the second time in his new weight class of 140 pounds.

Interestingly enough, Regis Prograis defeated Jose Zepeda last week to win the vacant WBC junior welterweight title in a more-than-expected thriller. All eyes should be watching this matchup between Lopez and Martin, mainly to compare performances, as this 140-pound division is flaming hot and filled with talent and potential interesting matchups.

Martin surprised us all by defeating the highly skilled boxer-puncher Garcia, and unlike Jose Pedraza, the original opponent of Lopez before Pedraza dropped off the fight with what was described as a “non-COVID illness,” Martin provides a more significant challenge to Lopez for several reasons. The main reason and — most important — is that psychologically Martin is at his best. He hasn’t lost a fight in more than five years.

Lopez is loud, brassy and genetically gifted. If you enjoy innovation, theatrical dance moves in celebration and punching power, this fight is for you.

I consider last-minute replacement fights at this level “trap fights.” A trap fight is a matchup that looks good on paper for the favorite, but the opponent is dangerous and may be capable of upsetting the A-side fighter. Lopez may think things will be easy, but the last time Martin fought in the U.S., the southpaw bested future Hall of Famer Mikey Garcia in his own state of California. Martin will surely be motivated to do the same against Lopez in Lopez’s backyard.

To Lopez’s credit, he has had a clean record against southpaws. In his young career, he is 2-0 vs. lefties, stopping one (Diego Magdaleno) and outboxing the other (Vasiliy Lomachenko). Lopez’s original opponent, Jose Pedraza, usually elected to fight from the southpaw position more times than none in his fights, so I’m sure Lopez and his team have been training for a southpaw all along. Martin is naturally a southpaw who had fought at 140 pounds his entire career. Let’s not forget this is Lopez’s just second appearance at junior welterweight, and adjusting to a new weight class takes time for the body to acclimate to adsorbing punches, as fighters come down from as much as 165 pounds which makes them slightly more robust and durable.

Martin is a pure boxer who can sometimes be slick with elusive head and lateral movements. He also tends to move forward when confident while staying out of range, looking to catch his opponent sleeping or force a mistake with feints to take advantage of any openings. Martin is not a prolific counter-puncher, and the essential key to defusing an explosive counter-puncher like Lopez is continuously countering his missteps. Lopez has tremendous punching power and bolt-like reflexes but tends to get complacent in spots. But the unique way Lopez faces southpaws combines his foot positioning, athleticism, timing, and punch variation.

Lopez can lead with any hand, right and left turned over on a dime which is vital in defeating a southpaw. Martin’s best weapons are his backhands and his upfront lead hook. Lopez has to avoid these two punches with his slightly improved defense, as he put on display last time out. And more importantly, Lopez needs to stay off the ropes — that should also be part of his defensive plan. I think the difference in this fight will be the precise accuracy of Lopez’s power shots and the time Martin allows Lopez to think without making him pay.