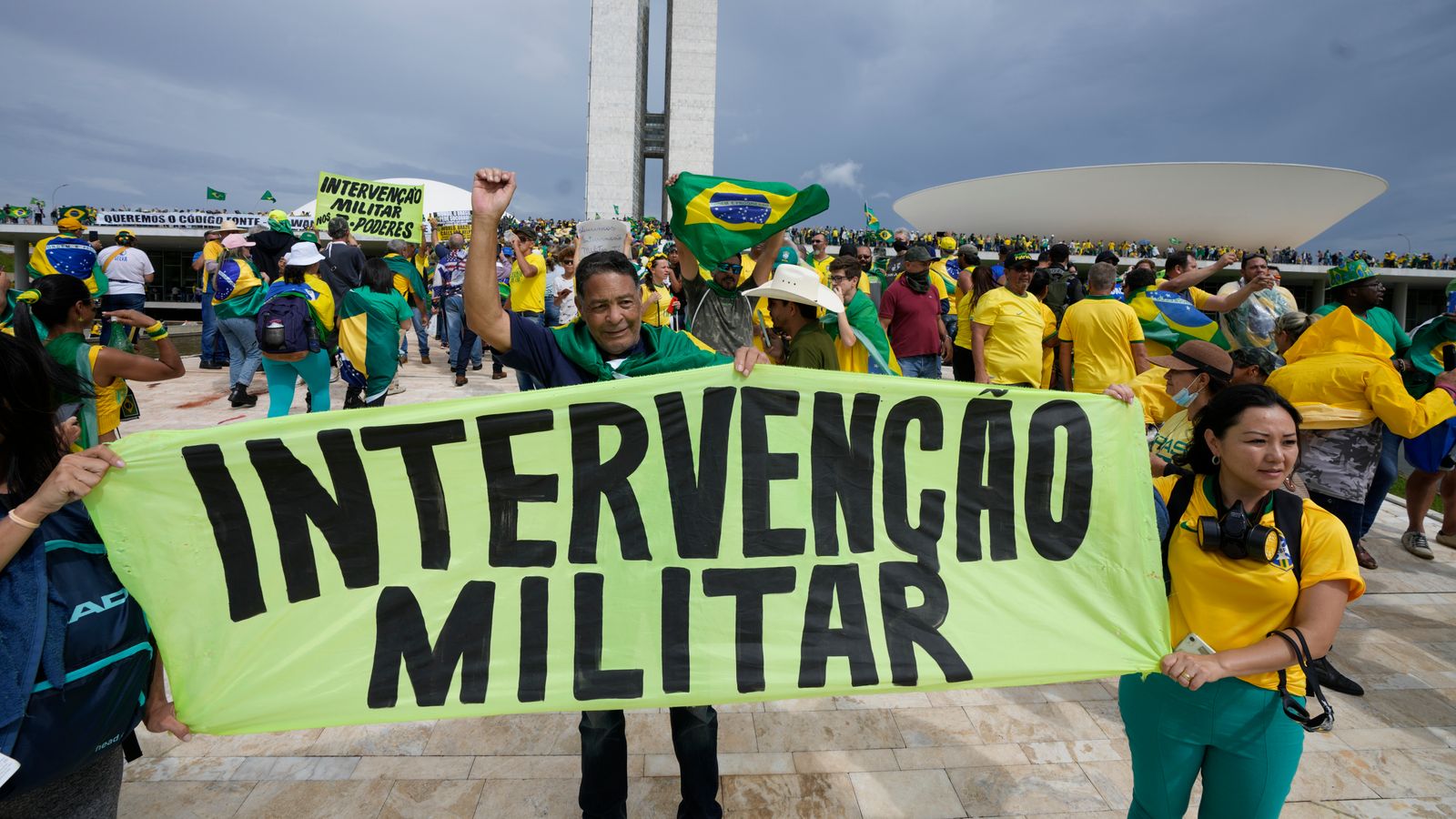 Footage and images on social media show what looks like thousands of people, many draped in the yellow and green of the Brazil flag, streaming up the steps of the National Congress building in the capital city.

It is understood the supporters broke through a blockade set up by security forces and invaded the ministries building and Congress.

Protesters also surrounded the Planalto Palace, according to Reuters, and have now entered the Supreme Court.

Local media estimate that about 3,000 people are involved.

Those who targeted Congress climbed the building’s roof and broke the glass in its windows.

Protesters were seen on television smashing furniture inside the Supreme Court and Congress.

Some of those who are protesting are calling for the military to get involved in restoring Mr Bolsonaro to power, carrying banners that proclaim “military intervention”.

Lula’s Workers Party has asked the office of the top public prosecutor to order security forces in the capital to contain the demonstrators.

Some of the pictures that have emerged show protesters clashing with security personnel, with tear gas being used.

Videos posted on Twitter show the destruction protesters have caused inside the Supreme Federal Court, including trashed-up furniture and smashed windows.

Brazil’s Public Prosecutor’s Office said in a statement that the Attorney General requested the “immediate opening of criminal investigative proceedings aimed at the accountability of those involved”.

The incidents have echoes of the 6 January 2021 invasion of the US Capitol and come after the left-wing Mr da Silva was sworn in on 1 January.

Supporters of Mr Bolsonaro have been protesting against Mr Lula’s election win since 30 October, blocking roads, setting fire to vehicles and gathering outside military buildings, asking the armed forces to intervene.

Lula da Silva beat Bolsonaro in the vote but the former president repeatedly questioned, without evidence, the credibility of the country’s electronic voting system. Many of his hardcore supporters have continued to believe him.

It comes just days after reports that the presidential palace had been left in a “deteriorated” condition after Mr Bolsonaro moved out, with several items allegedly missing.

According to Ms da Silva, who showed Brazilian TV network TV Globo around after she moved in, rugs had been torn, floors damaged, a window broken, water leaks had stained a ceiling, and a massive banquet hall left bare of furniture.

Many world leaders have come out to support the Brazilian government, with Spanish Prime Minister Pedro Sanchez saying: “All my support to President @LulaOficial and to the free and democratically elected institutions of the Brazilian people.

“We categorically condemn the assault on the Brazil’s Congress and make a call for the immediate return to democratic normality.”

Chilean President Gabriel Boric said: “The Brazilian government has our full support in the face of this cowardly and vile attack on democracy.”

While Colombian President Gustavo Petro said: “All my solidarity to @LulaOficial and the people of Brazil. Fascism has decided to stage a coup. … It is urgent for the OAS (Organization of American States) to meet if it wants to continue to live as an institution.”