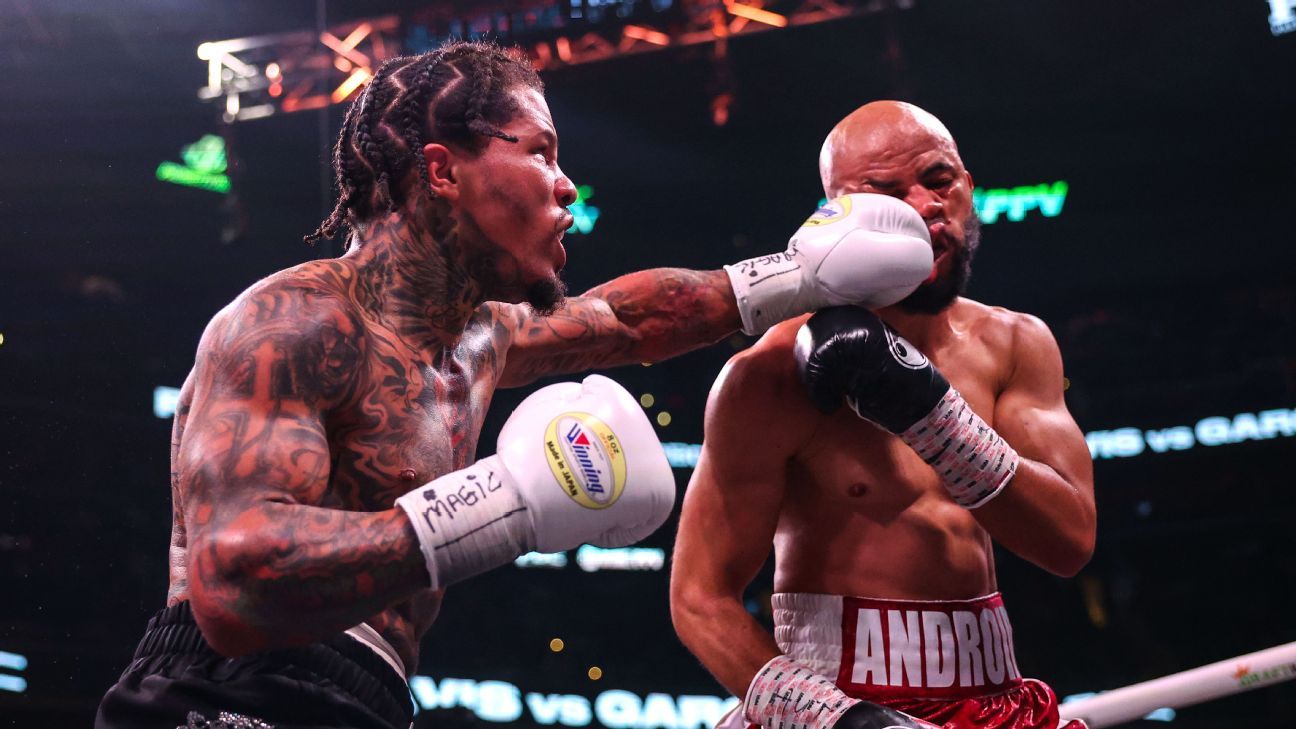 Gervonta Davis usually starts slow, as he did Saturday night, but he once again found the bout-ending shot to move on to what should be a superfight vs. Ryan Garcia on April 15 in Las Vegas.

Moments after Davis landed the left hand that prompted Hector Luis Garcia to retire on his stool ahead of Round 9, Ryan Garcia (no relation) tweeted “Goodbye Tank, [it’s] over for you. … No more talking, let’s get it on April 15.”

Davis (28-0, 26 KOs) was plenty good on Saturday after the first three rounds against the 8-1 underdog. And “Tank” once again packed the house, this time bringing in an announced attendance of 19,731 to Washington, D.C., which is roughly 40 miles from his hometown of Baltimore.

However, it hasn’t mattered where (or against whom) Davis fights — fans have followed, and he is undoubtedly one of the biggest stars in the sport. A matchup with Ryan Garcia promises to be far more anticipated than all the rest, a genuine marquee event that should cross over into the mainstream.

Davis brings the stars out, but so does Garcia, a 24-year-old with 9 million Instagram followers. And despite all of Davis’ success through 28 fights, Garcia represents a massive step up in competition.

While Garcia is equally untested at the elite level, he possesses arguably the quickest hands in boxing and will enjoy a considerable size advantage over Davis, who is 5-foot-5-and-a-half inches (Garcia is 5-foot-11).

Davis, 28, is considered the superior boxer, but his best win remains a 2017 stoppage victory over Jose Pedraza to win a 130-pound belt, his only full-fledged world championship to date.

At 135 pounds, Davis is rated No. 3 by ESPN behind undisputed lightweight champion Devin Haney and former unified champion Vasiliy Lomachenko, who are in talks to fight in May. But Davis could still prove to be the best of the bunch.

He showed off his patient approach against Hector Luis Garcia, a 130-pound titleholder who moved up in weight. Also on display: Davis’ crushing power and combination punching, which are among the best in the sport when he’s found second gear.

Davis connected at will with right hooks and straight lefts as the fight wore on, but he’ll have a far tougher task at hand against Ryan Garcia, who packs the power to make Davis pay for any mistakes he makes. Hector Luis Garcia boasted a sharp southpaw jab but never possessed the power necessary to gain Davis’ respect.

That’s what makes the matchup between Davis and Ryan Garcia so fascinating. Garcia has proved against lesser foes that he can time them coming in with a crisp check left hook that keeps them honest and often ends a fight. Can Davis avoid the shot as he works his way onto the inside?

First, he’ll need to make it to fight night. The matchup with Garcia still isn’t official, and Davis has legal problems to deal with first. Davis will stand trial on Feb. 16 in Baltimore for his alleged involvement in a hit-and-run incident that took place in November 2020. Davis was accused of fleeing the scene of an accident that involved four people, including a pregnant woman. Davis faces 14 charges, including failure to immediately return and remain at the scene of an accident involving bodily injury.

According to the Baltimore City State Attorney’s Office, a Baltimore Circuit Court judge declined to approve a plea deal that would have avoided jail time in lieu of house arrest. The trial is expected to last two days.

Last week, Davis was arrested in South Florida after he allegedly struck a woman on the right side of her head with a “closed hand type slap,” according to police. He was charged with misdemeanor battery. Davis, who denied the allegations, referred to the woman as the mother of his daughter.

The woman later said that Davis “did not harm me or our daughter.” The arrest came 14 days after a domestic violence case was discharged stemming from a February 2020 incident where Davis was accused of striking the mother of his daughter on the campus of the University of Miami.

“I have to bring my people in close and listen to my close ones, listen to [PBC founder] Al Haymon and just stay focused,” Davis said. “There’s a lot of bumps in the road, but if we stay focused together — that’s how I’ll [maintain] longevity in the sport.”